The same day that the twin girls were born that are mentioned in the last post Raina met Pat May.  They flirted on the lawn and the funniest thing happened.  One of the fathers Lex Chong walked up and started freaking out.  This didn't stop Raina from getting pregnant by Pat though.

I miss Karlie helping with the babies.  She might have been gloomy and annoying at times but it was nice having her there.

Aron ages to teen before his twin Tevin.  The next day Tevin and Alfred got A's but not Greg.

Raina has enough handiness skill and starts upgrading everything in the house. 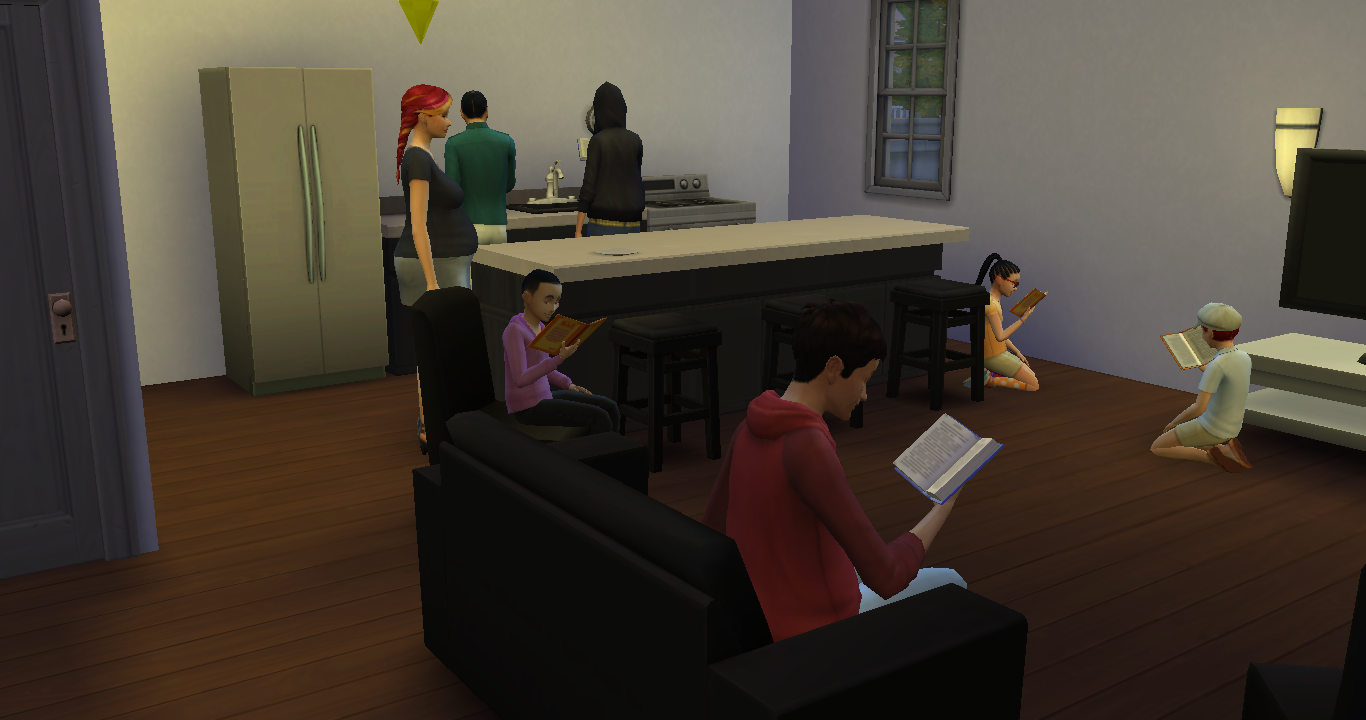 pic: Behind Mom is Alfred and Aron, Sitting down is Greg and Tevin and on the floor is Emma and Kristyn.  They are all working on their homework. 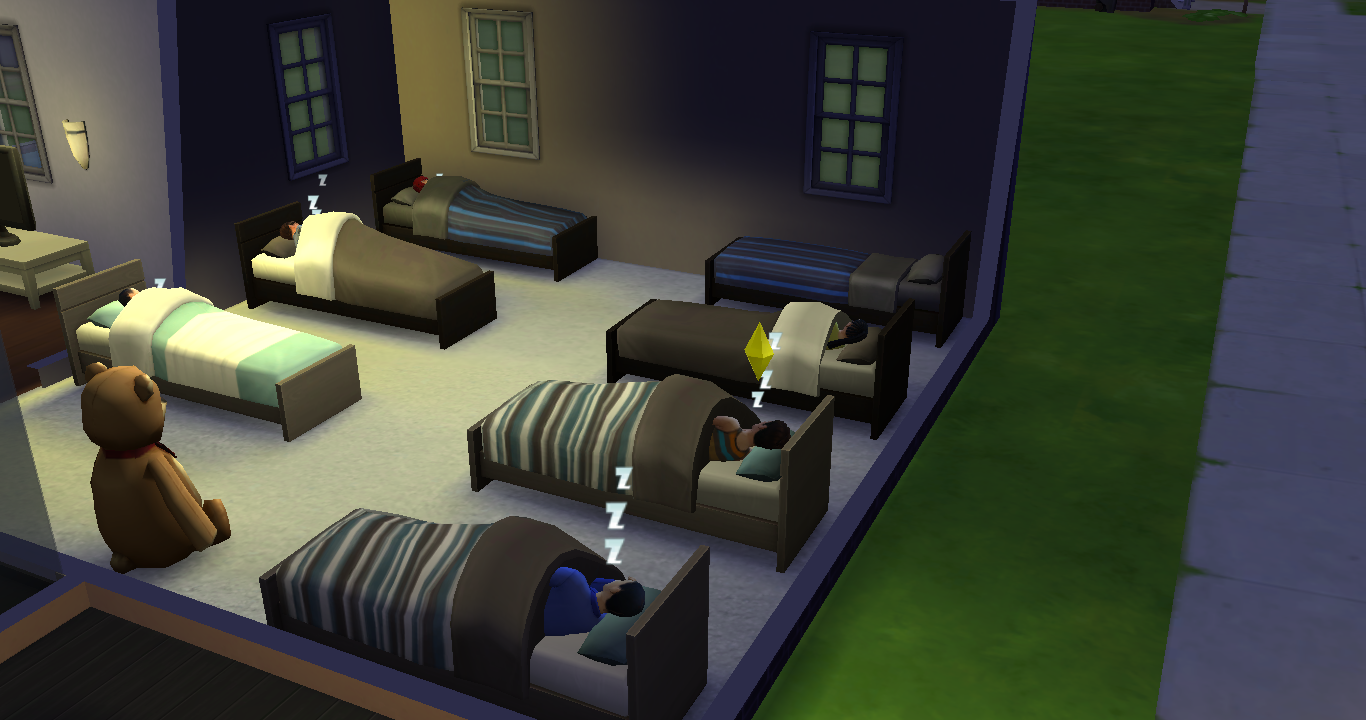 pic: I had to take this one with the walls down.  I just thought it was cute to have all the beds taken but one.

Raina has a baby boy Ethan.  She has a full house so can't get pregnant again yet.  She is getting really close to elderhood so I think her next baby will be her last.  Alfred set fire to the house and himself.  I was afraid he was going to die!  That day Aron, Alfred and Tevin all got A's and moved out making room for more babies.  The day after that Raina flagged down elder Benjamin Keating for a little romance.  Greg got an A and moved out filling up the 2nd house. 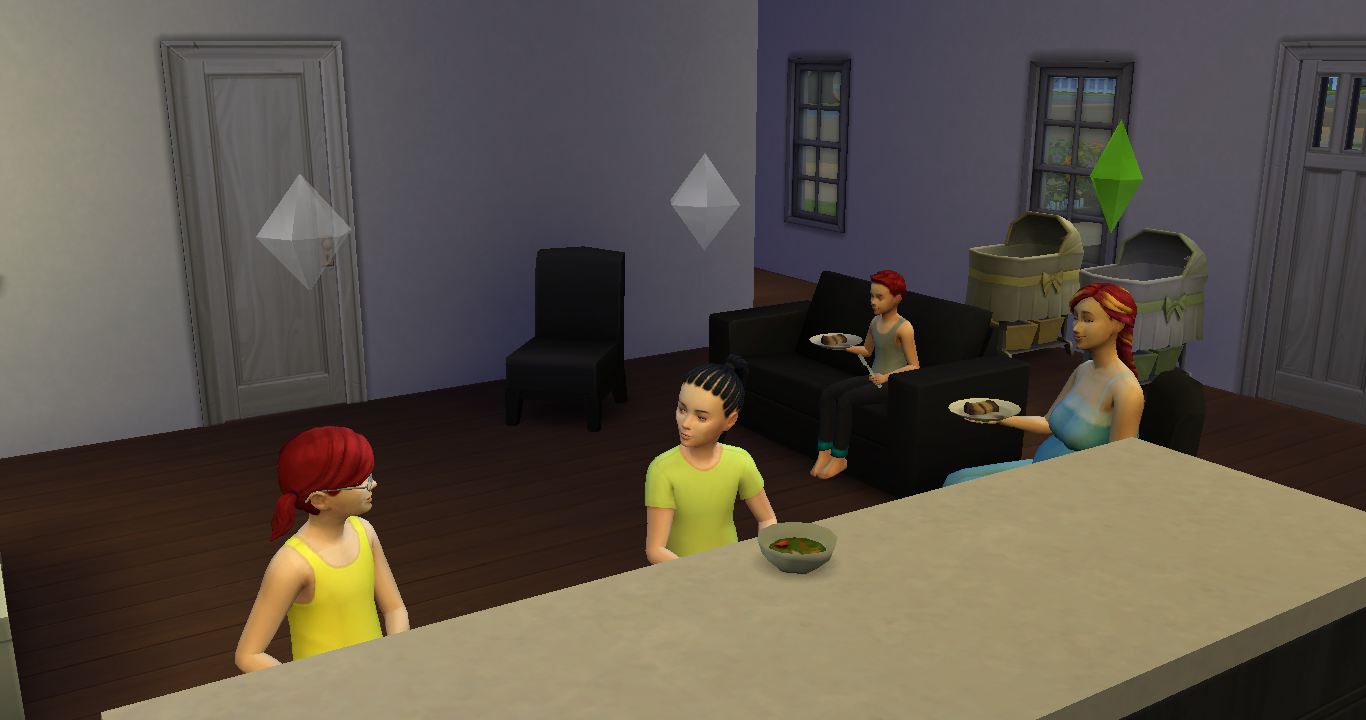 pic: It's odd only having 3 children in the house.  Kristyn, Emma and Ethan.

Raina gives birth to twin boys Caden and Tate.  Caden is much darker skinned than Tate. 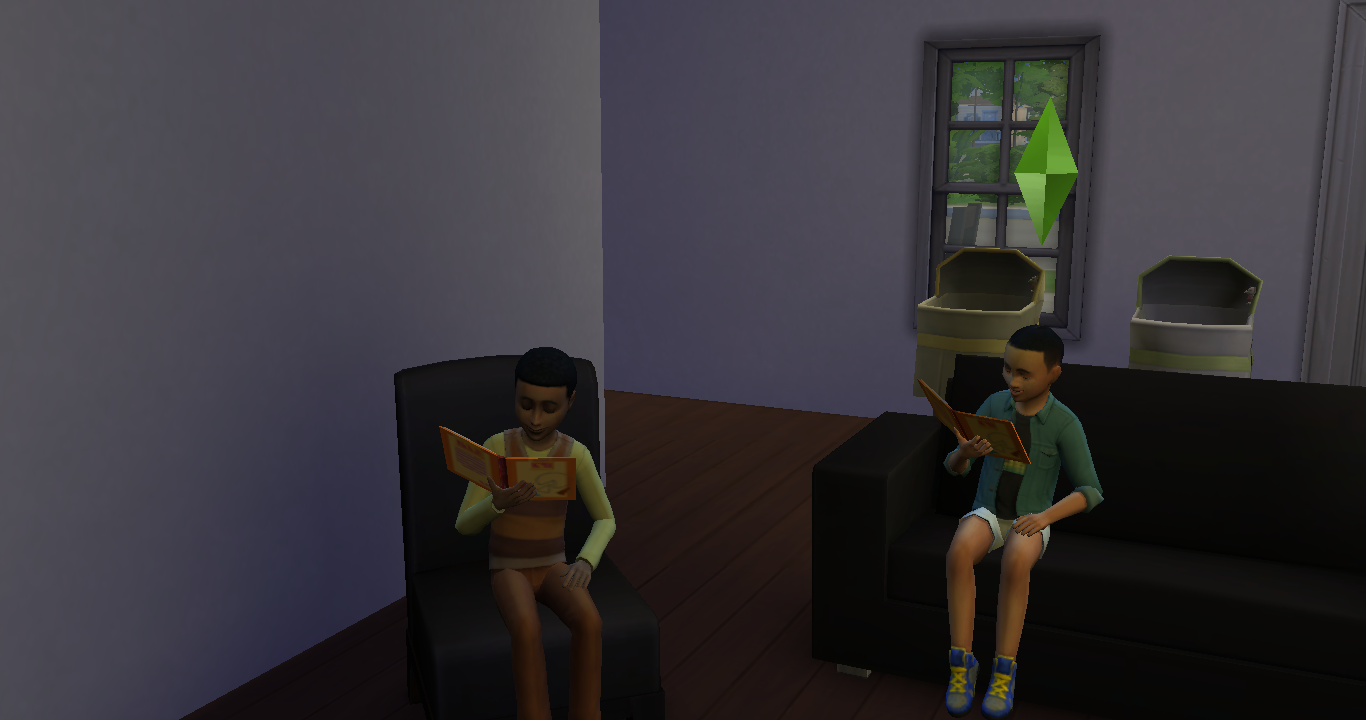 pic: Caden and Tate after they age up.  Notice how much darker Caden is than Tate. 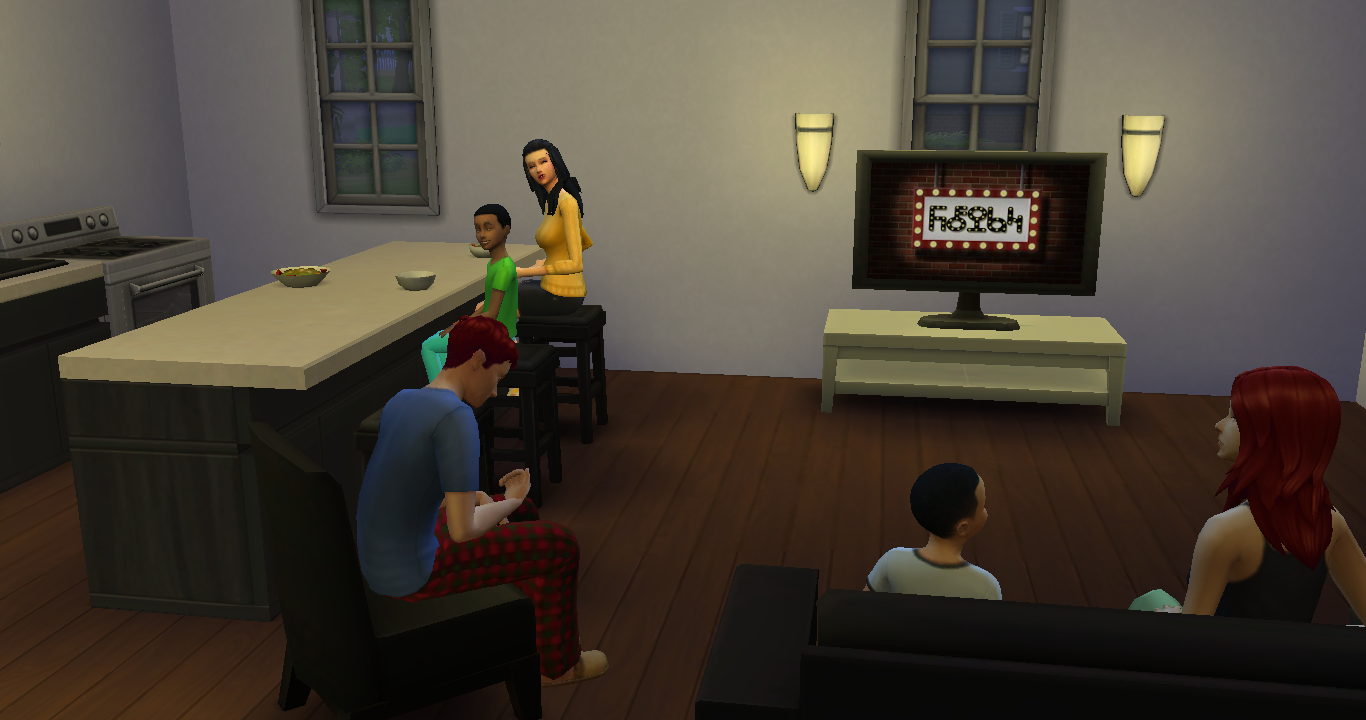 pic: The remaining kids.  Kristyn and Emma got A's in school and Kristyn moved out shortly after this picture was taken.  Raina aged to an elder leaving Emma as the new matriarch. 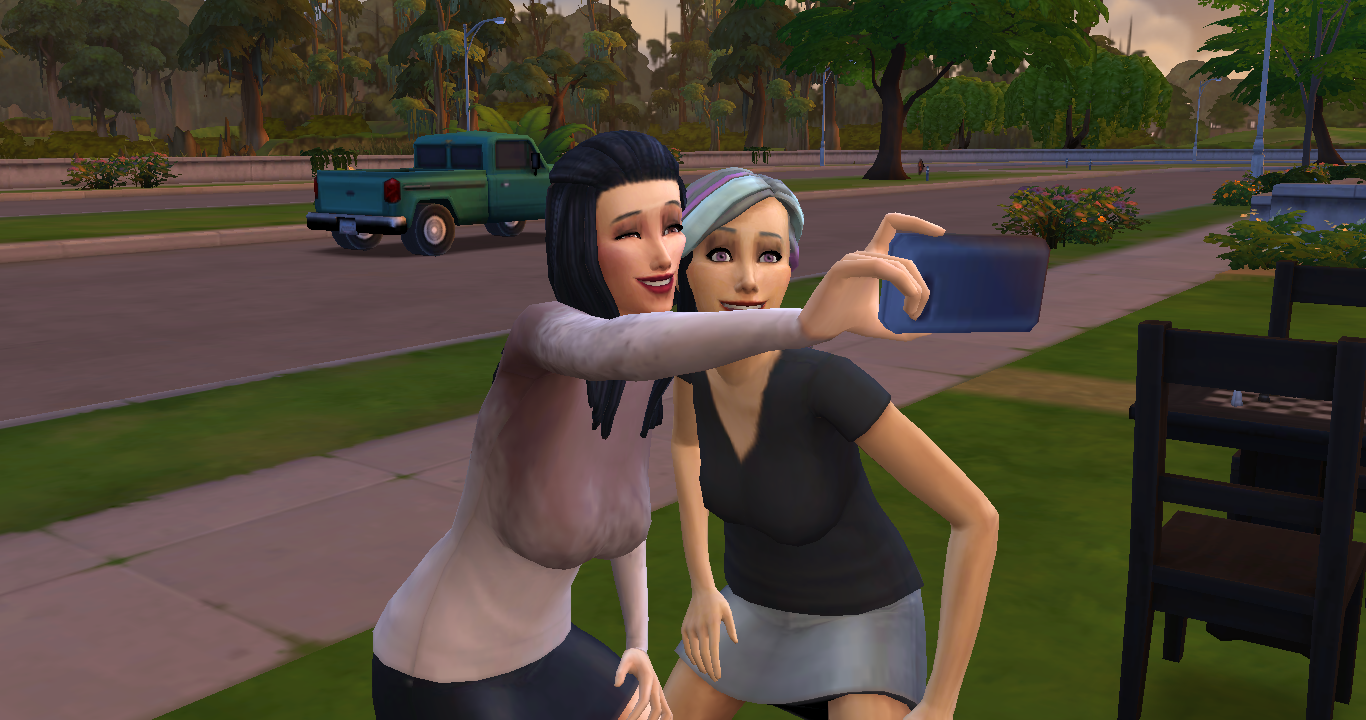 pic: Emma with her mother.  I really lucked out with Emma.  Her aspiration is Painter Extraordinaire and her traits are neat, creative and romantic.
Posted by Rainy at 11:37 AM