I think I'm getting the hang of this.  I've gotten a routine with the Marx family that works out pretty well.  I also started playing the Pleasants and the Goths.  I know I said I wasn't interested in that but oh well.  All in all I'm having a blast playing Sims 2.  I'm so glad I decided to give it a try! 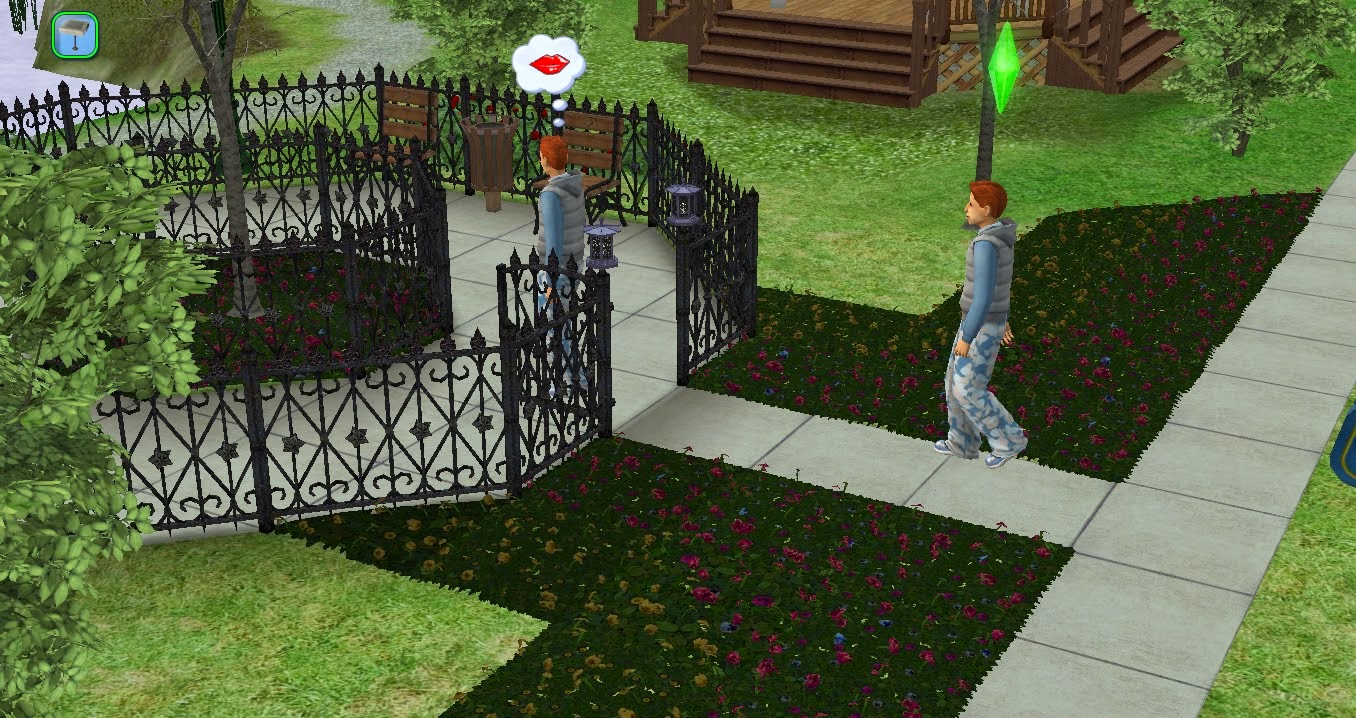 David and Jimmy go to the park to look for girls. 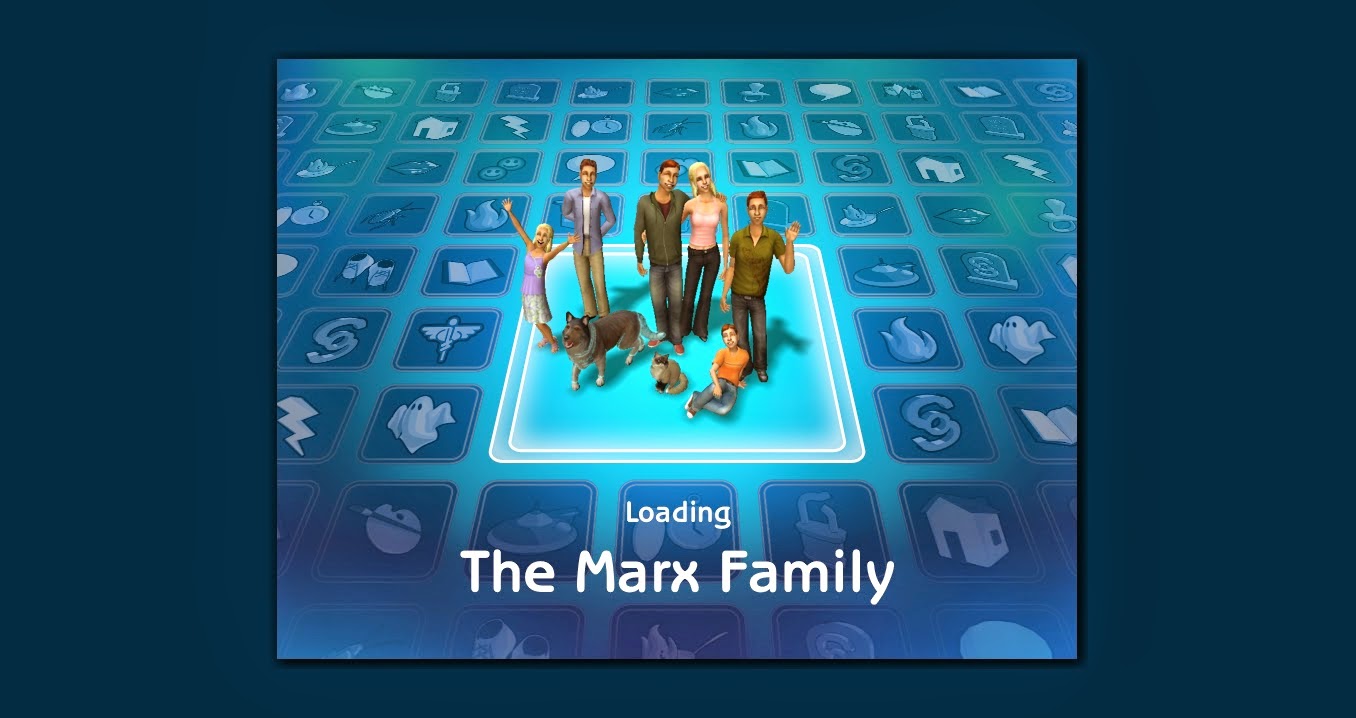 Their loading screen is so cute!  I have it as my desktop wallpaper. 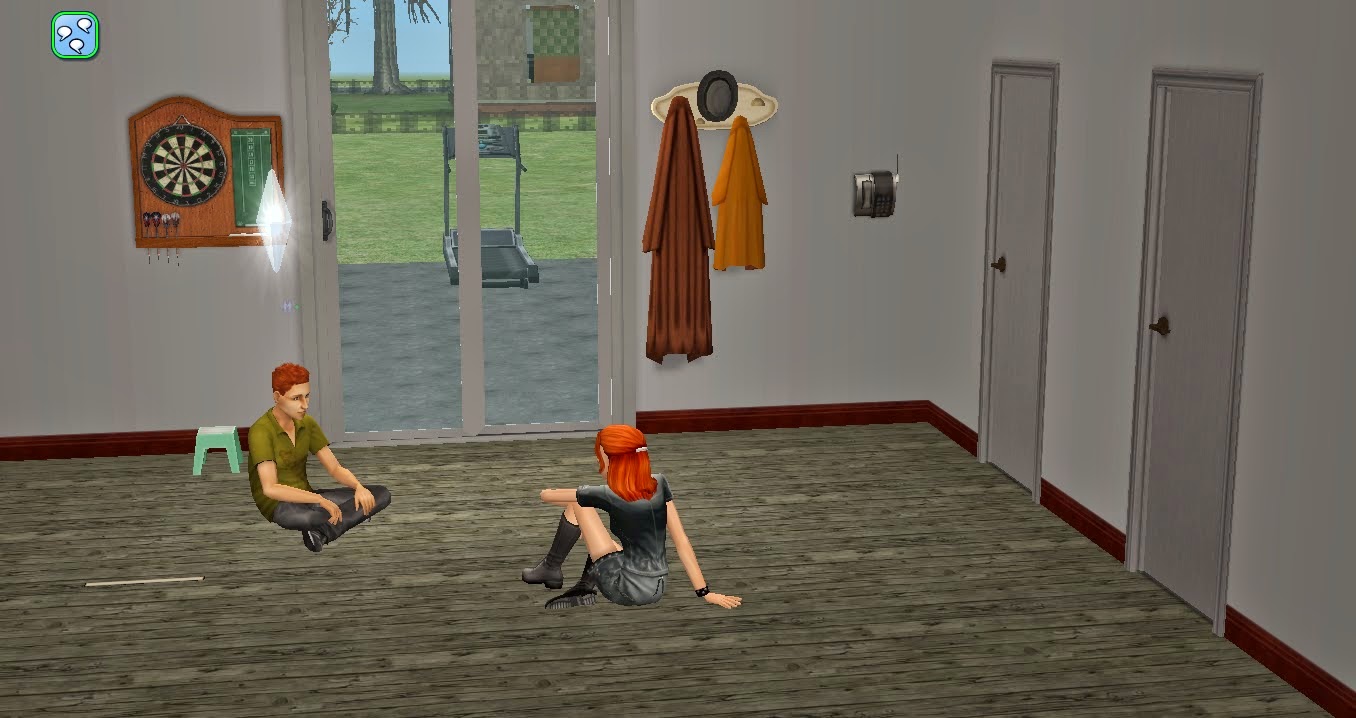 Jimmy met Lillith Pleasant at the park and invited her over.  According to what I read online about her she has a boyfriend but she doesn't seem to mind cheating on him.  Jimmy doesn't mind because he's a romance sim.  He already has the wish for another love, lol. 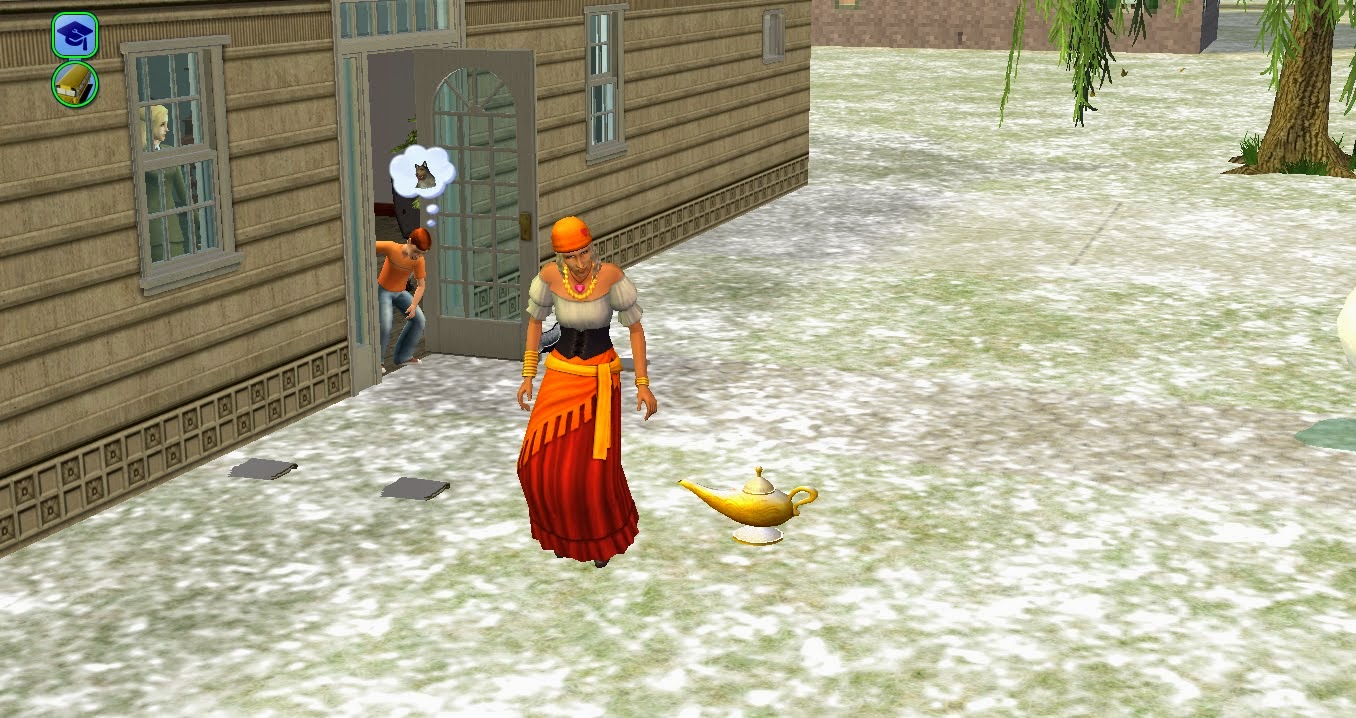 Another Genie lamp!  I looked it up this time cuz I was like what is going on here?   It seems that if you get 16 hobby points you get a lamp.  Monica was playing the piano, that's the only thing I can thing of.  I've gotten it so many times on different households, it's just weird.  Now all the family has platinum needs. 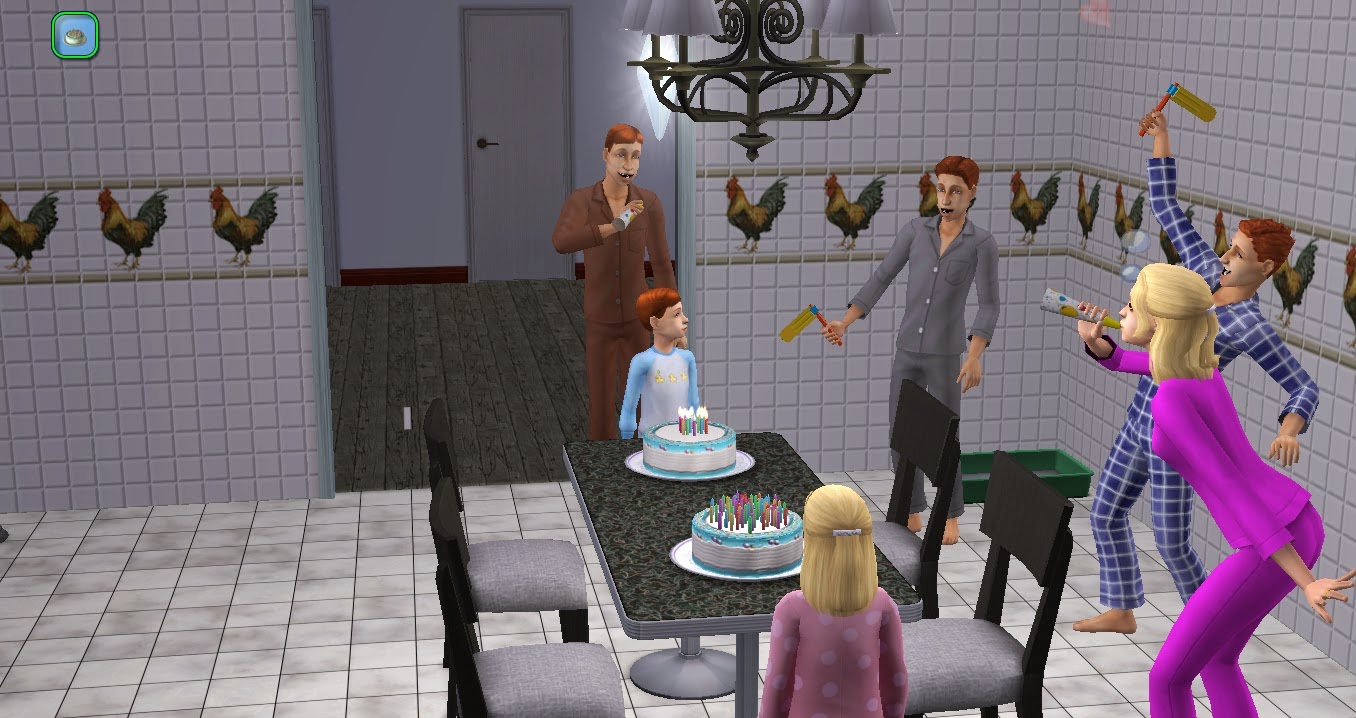 It's Alex and Monica's birthday.  Alex goes first.
(BTW I love how everyone crowds in and cheers for the birthday sim.  In Sims 4 they don't even pay attention unless they are right next to the birthday sim.) 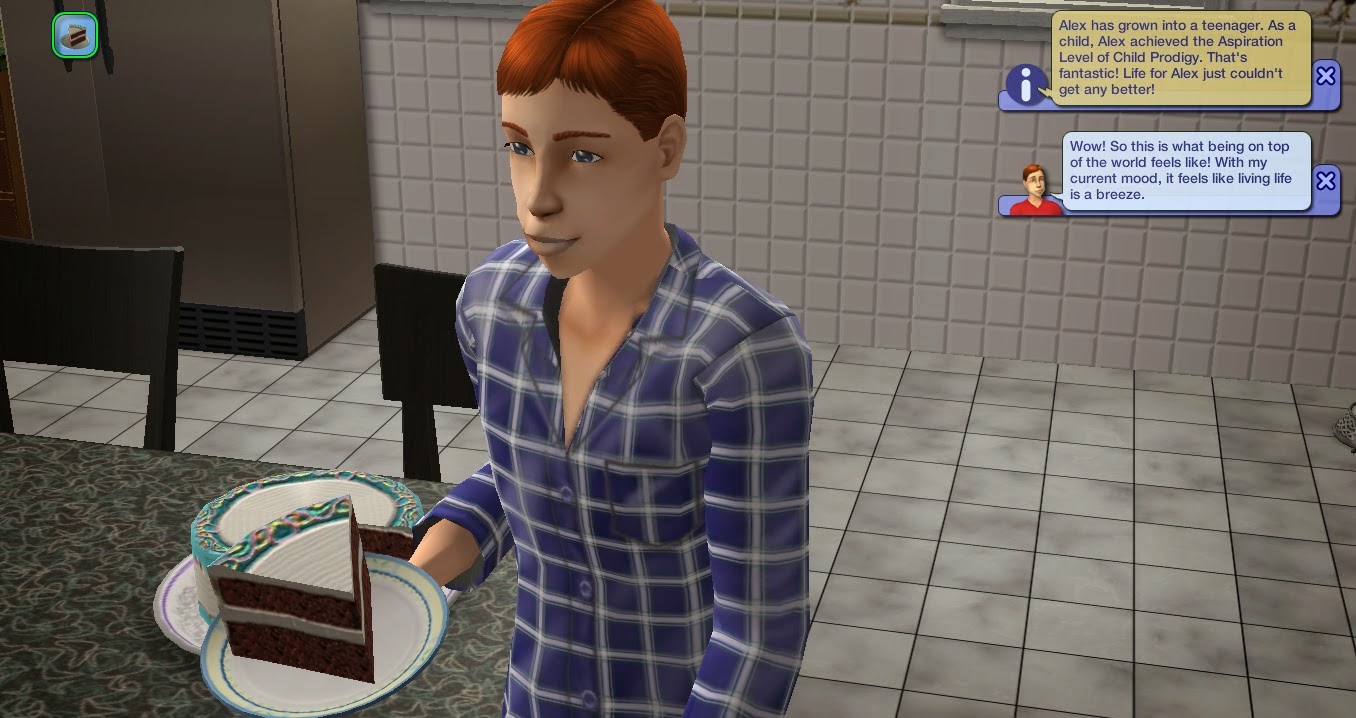 He looks too much like his brothers and Dad.  I think I'll have to change his hair.  He rolled the family aspiration like David. 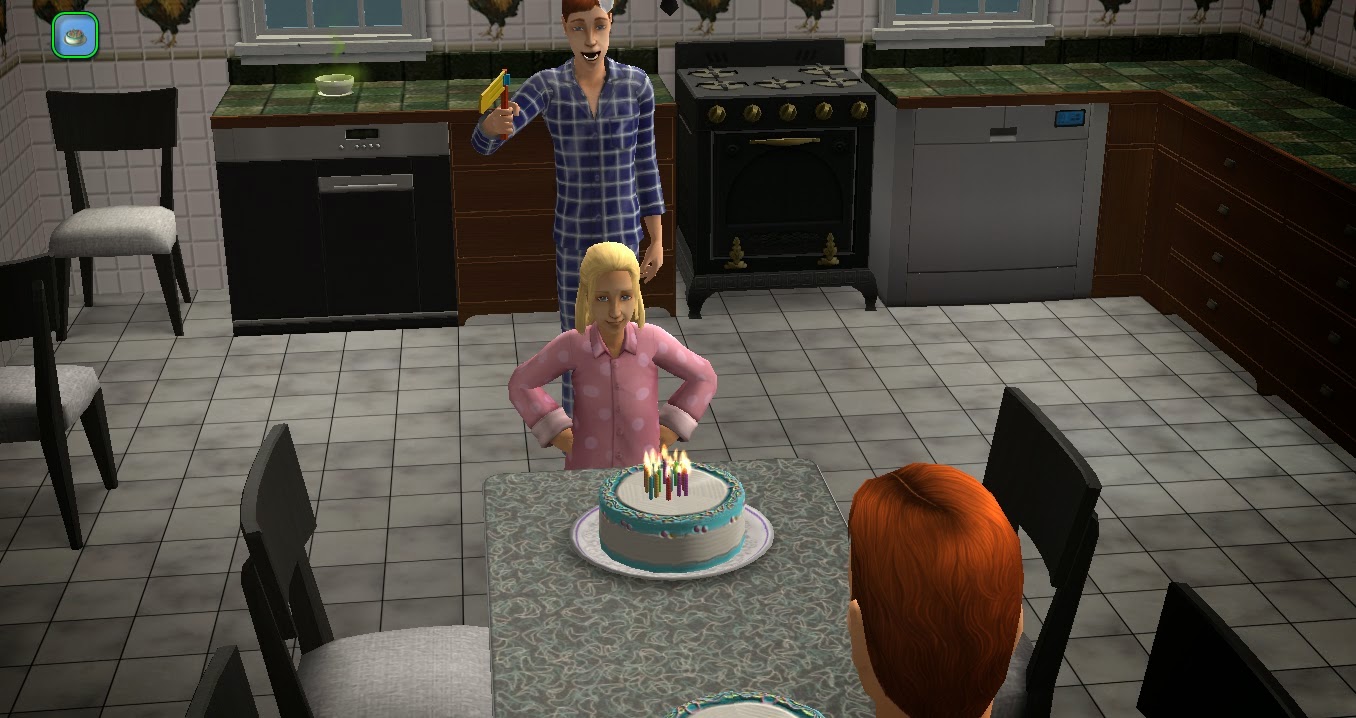 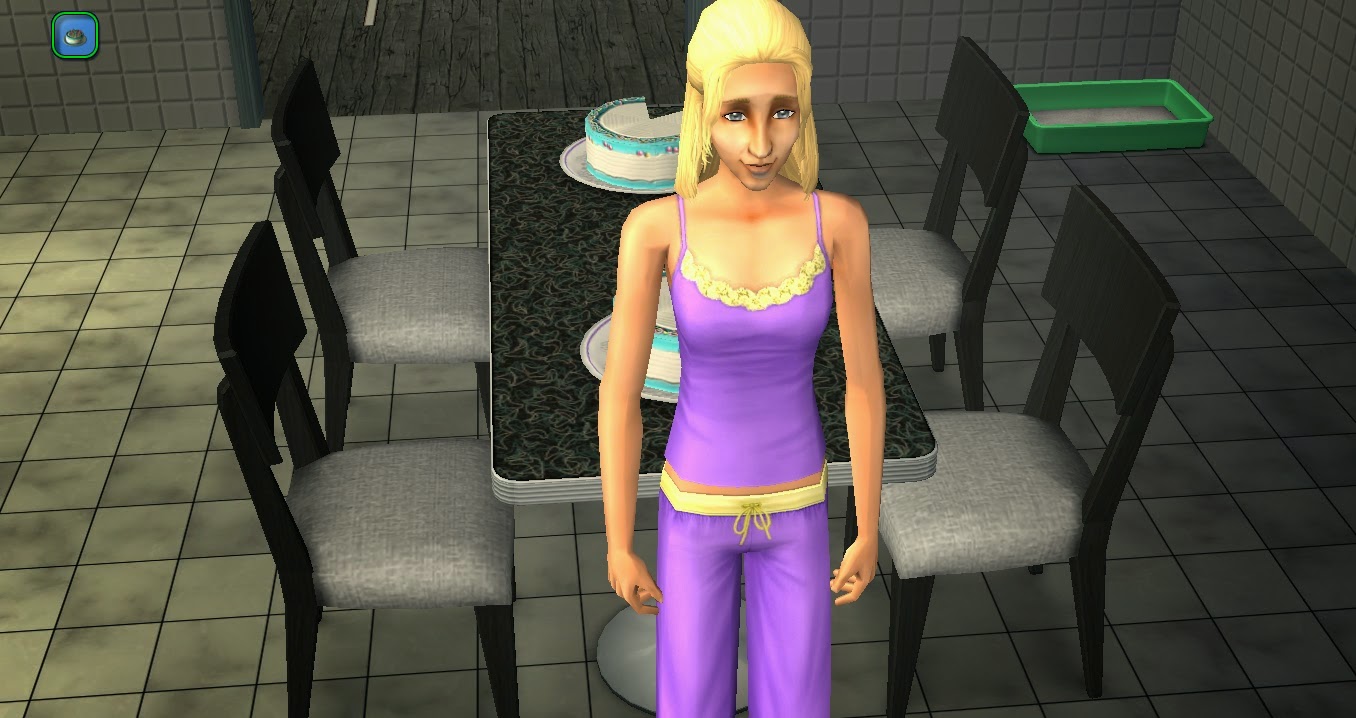 Sheesh she got the same hair as her mother so that'll need to be fixed as well.  She rolled the fortune aspiration. 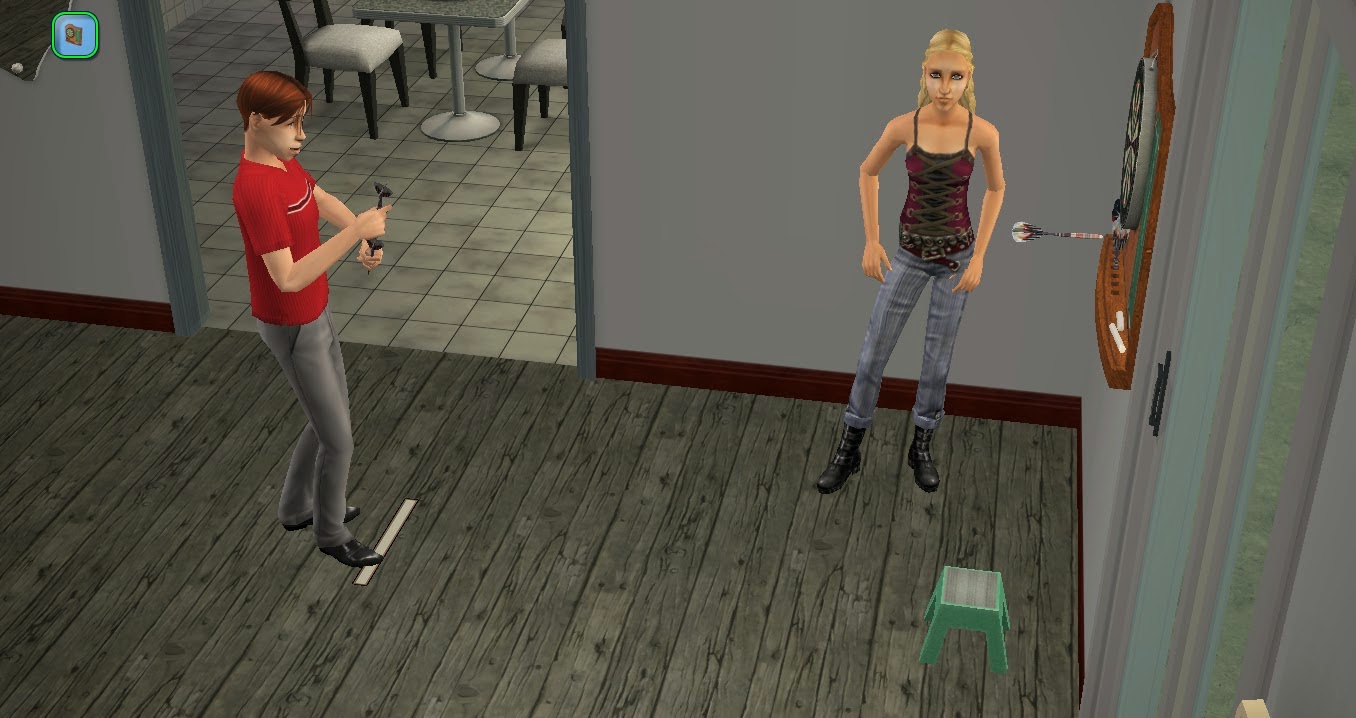 Alex and Monica after changing their hair.  I liked the clothes they got so I didn't change them. 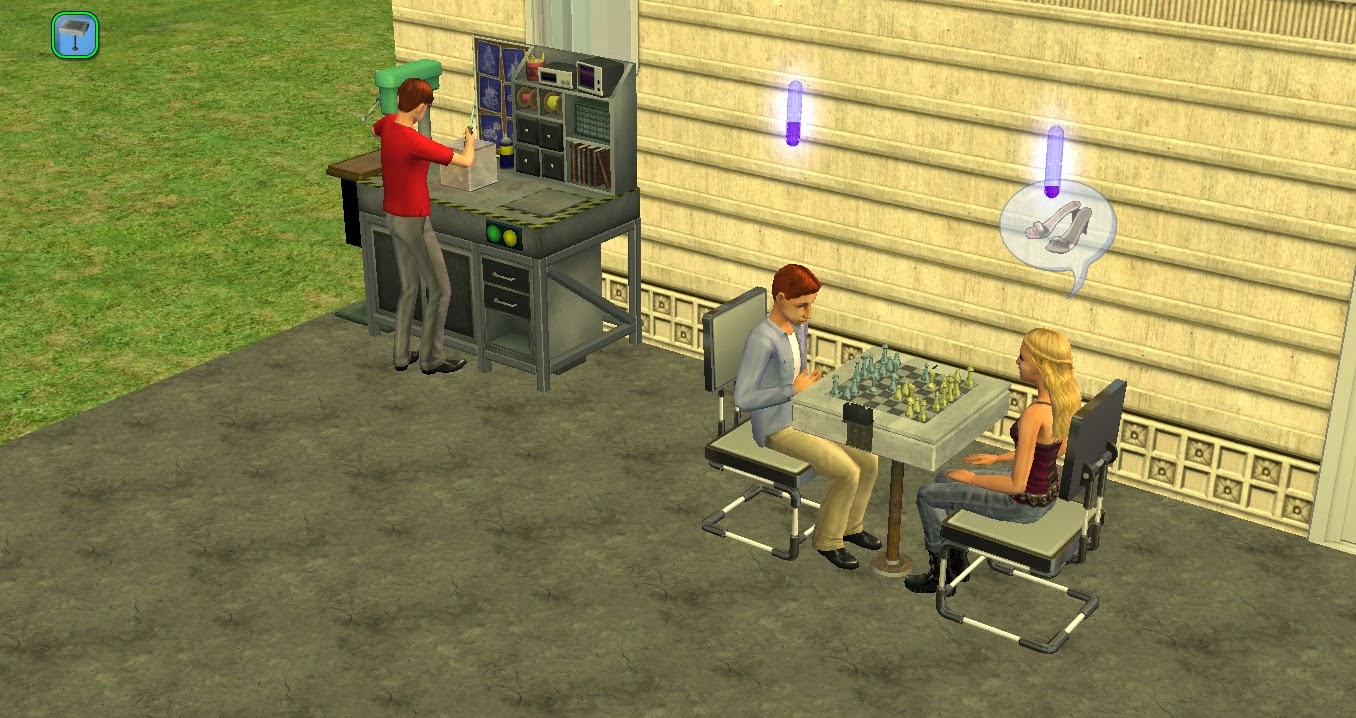 Alex gets a robot crafting station.  I plan for him to have a business I'm just not sure if I want to do home or not?  David and Monica play chess for the logic they'll need for school/work. 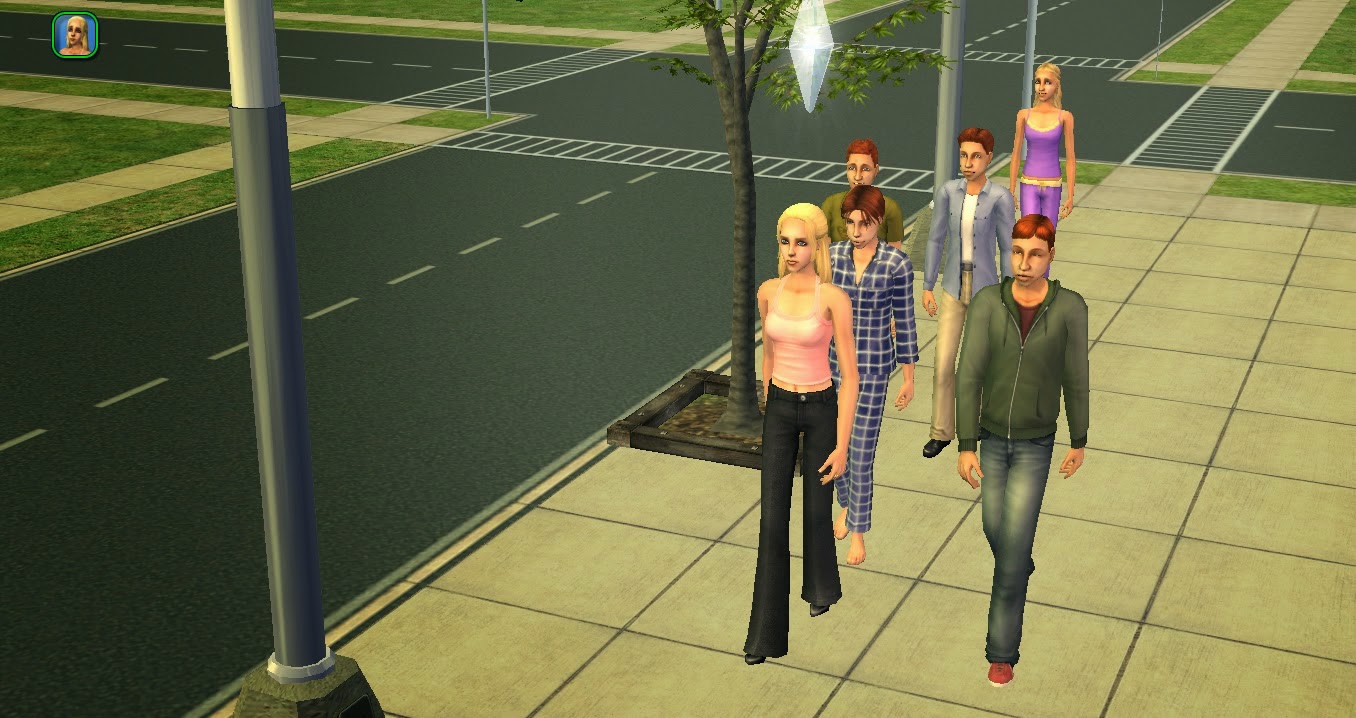 Everyone had the day off so they all went to the community center.  I have no idea why Alex and Monica are in their pjs.  It was a boring day and they didn't meet anybody interesting.  Yay for the time thingy, they didn't waste their day after all. 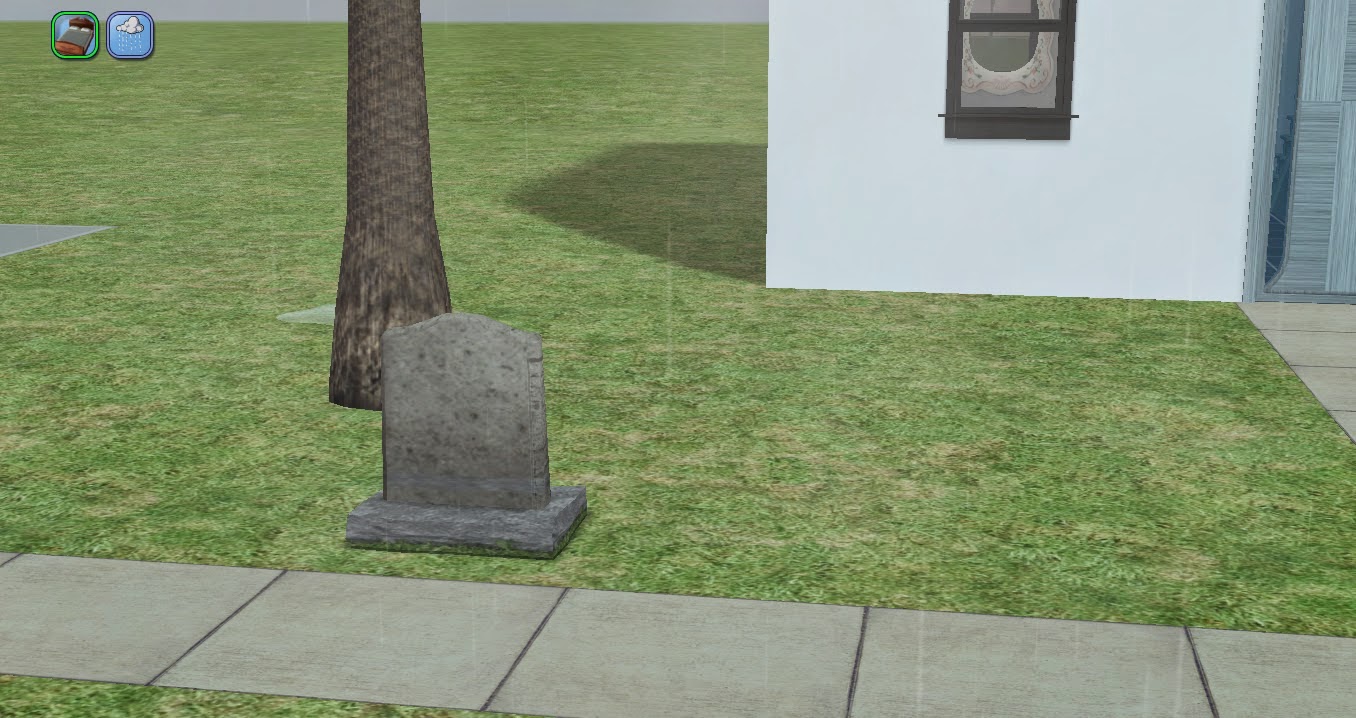 I decided to play Sierra's parents and Sierra's Mom died.  I was so bored I had it on high speed and missed the grim reaper! 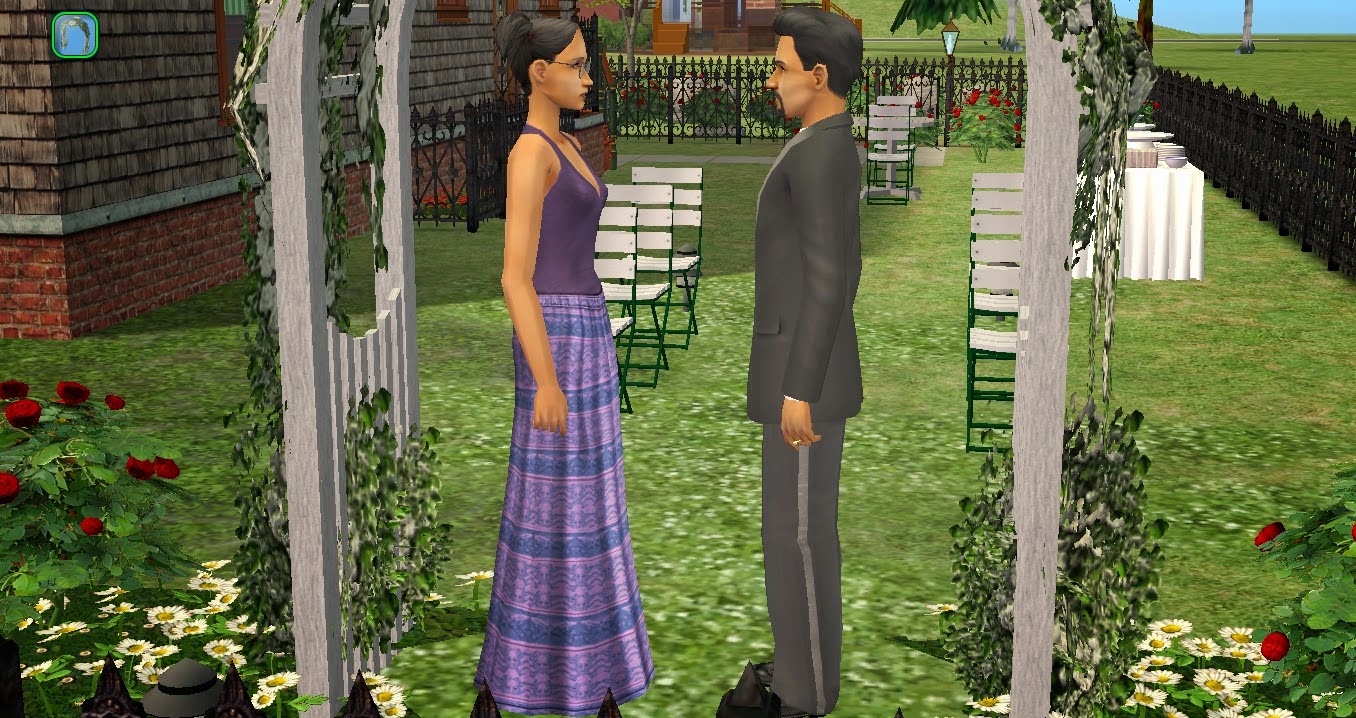 I played the Pleasants then switched to the Goths for the first time.  There was this like step by step get Cassandra and Don married thing.  So now they're married and she's pregnant.  I added family as his 2nd aspiration so we'll see how it goes.  I also changed her hair cuz omg I hate those pony tails! 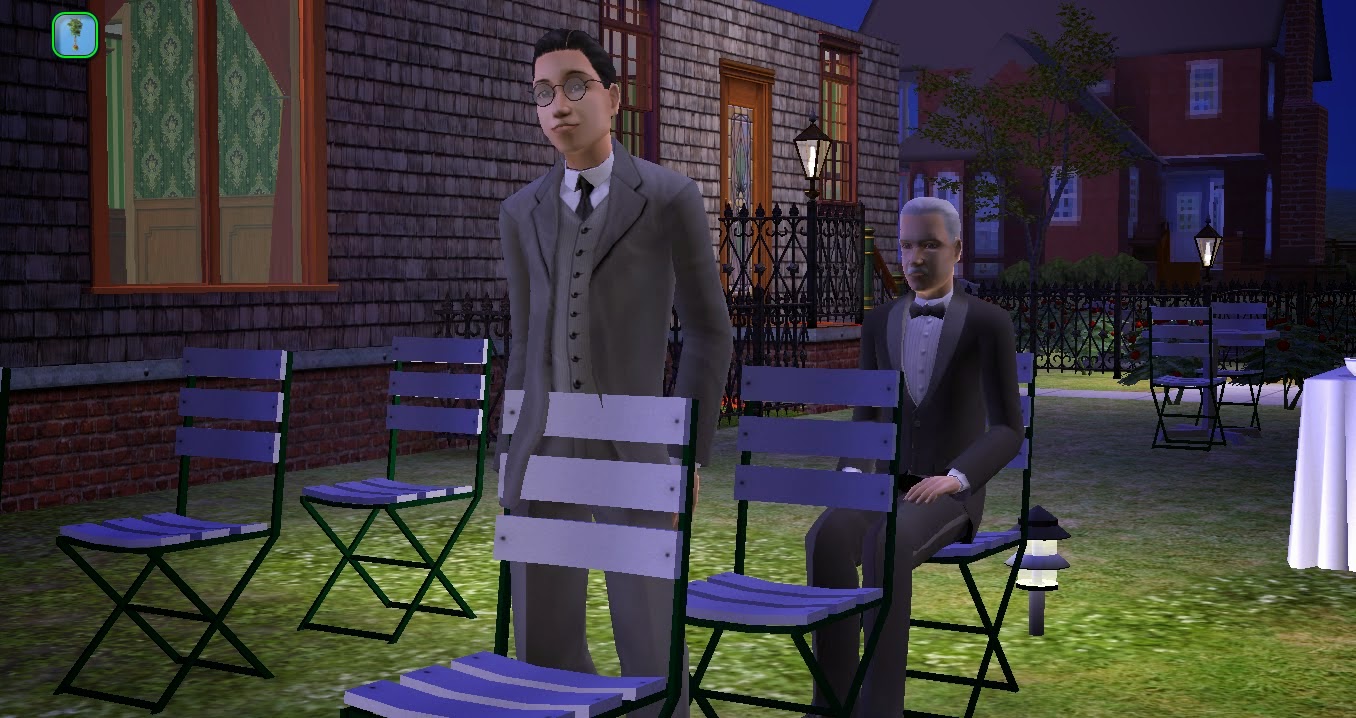 I aged Alexander to teen and darned if he doesn't look like my Sims 4 Alexander!  I'm thinking of hooking him up with Monica. 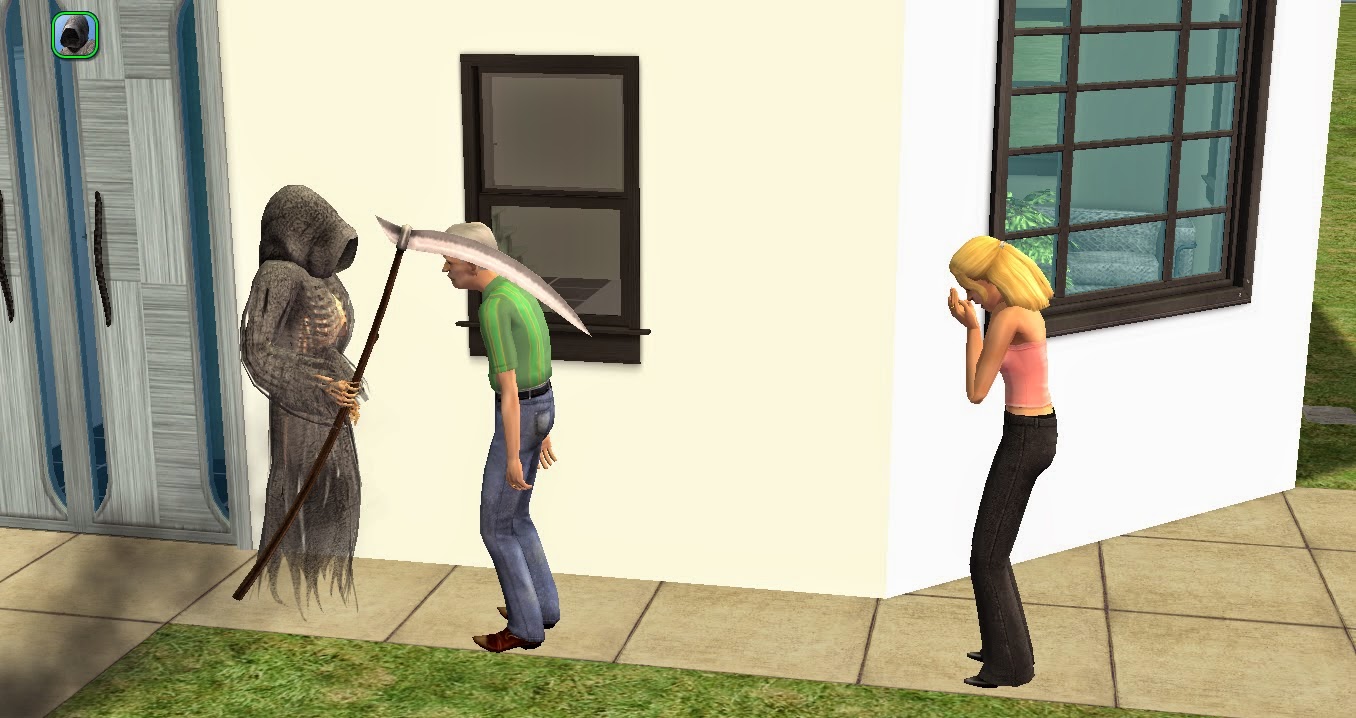 I played the Marx family for a few days then decided to switch over to Sierra's Dad.  I noticed he had enough money to buy another car so he invited Sierra over to give it to her.  Just in time because Grim showed up while she was there! 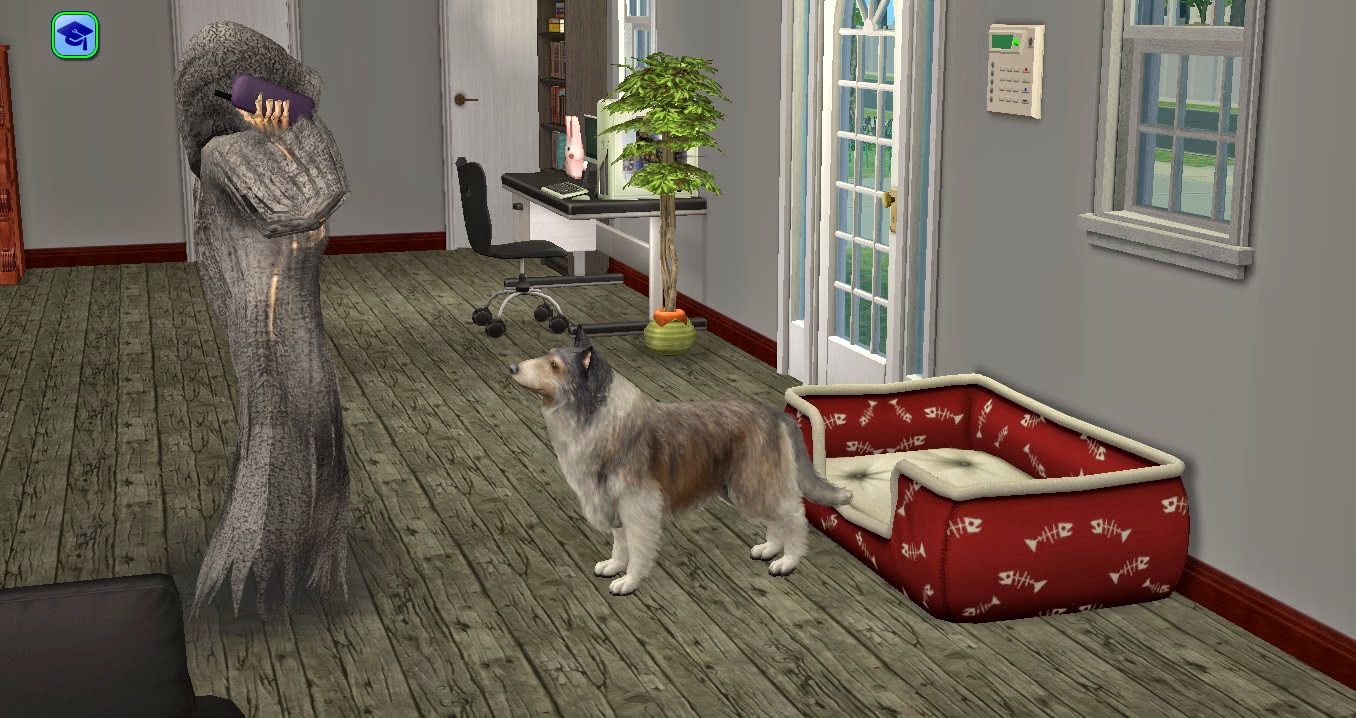 I switch back to the Marx family and Scruffy dies!  I'm getting sick of seeing Mr. Grim.  I really liked that dog. 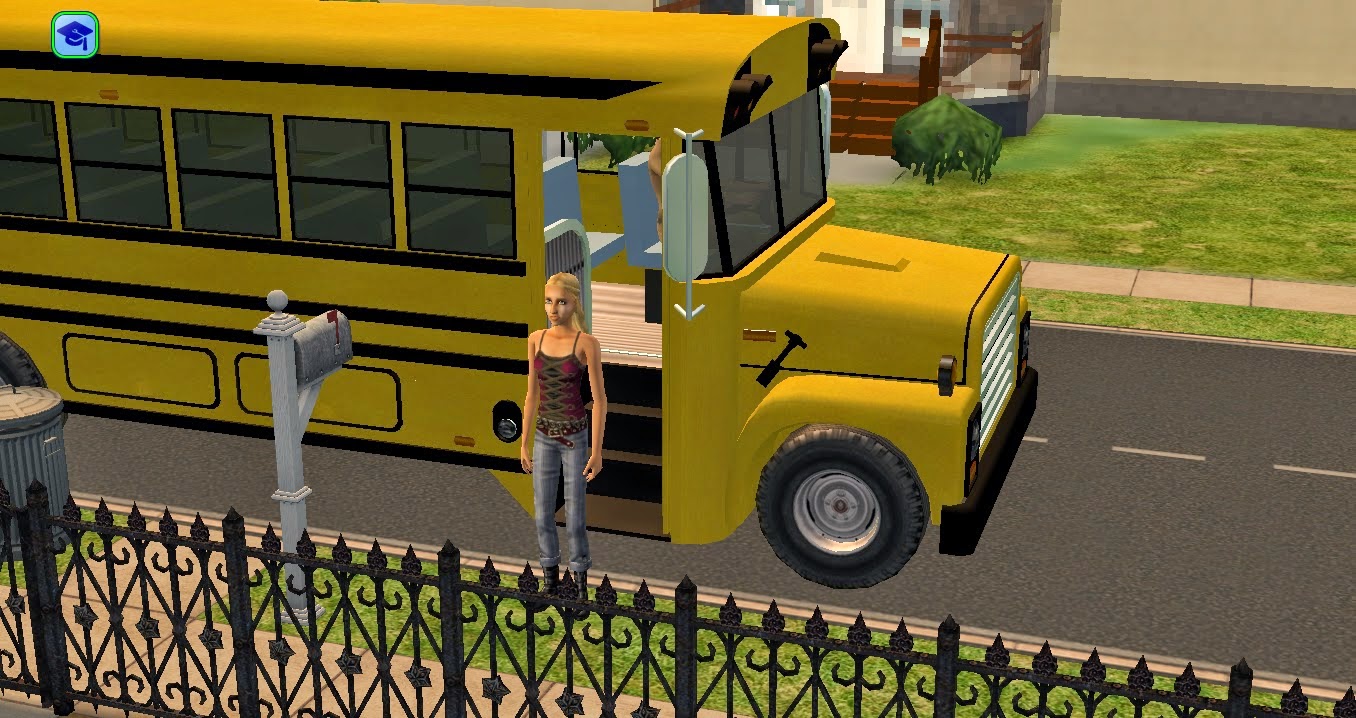 Back at the Goths, the 1st day Alexander goes to school he brings Monica home.  They talk and flirt and have their 1st kiss.  The only problem with the cutscenes is you don't get that 1st kiss pic.
Posted by Rainy at 1:43 PM