TS2 Going Oldschool- Too Many Kids!

For my intro to Sims 2 and the family go here.  So my intentions are to eventually have this as at least a partial neighborhood rotation.  Partial meaning I don't intend to play the Goths or any of them unless they become a romantic interest of one of my played sims.  It all started with a woman and her cat.  Now it's just insanity!  I left off in the introduction with Rhys and Sierra having twin boys.... 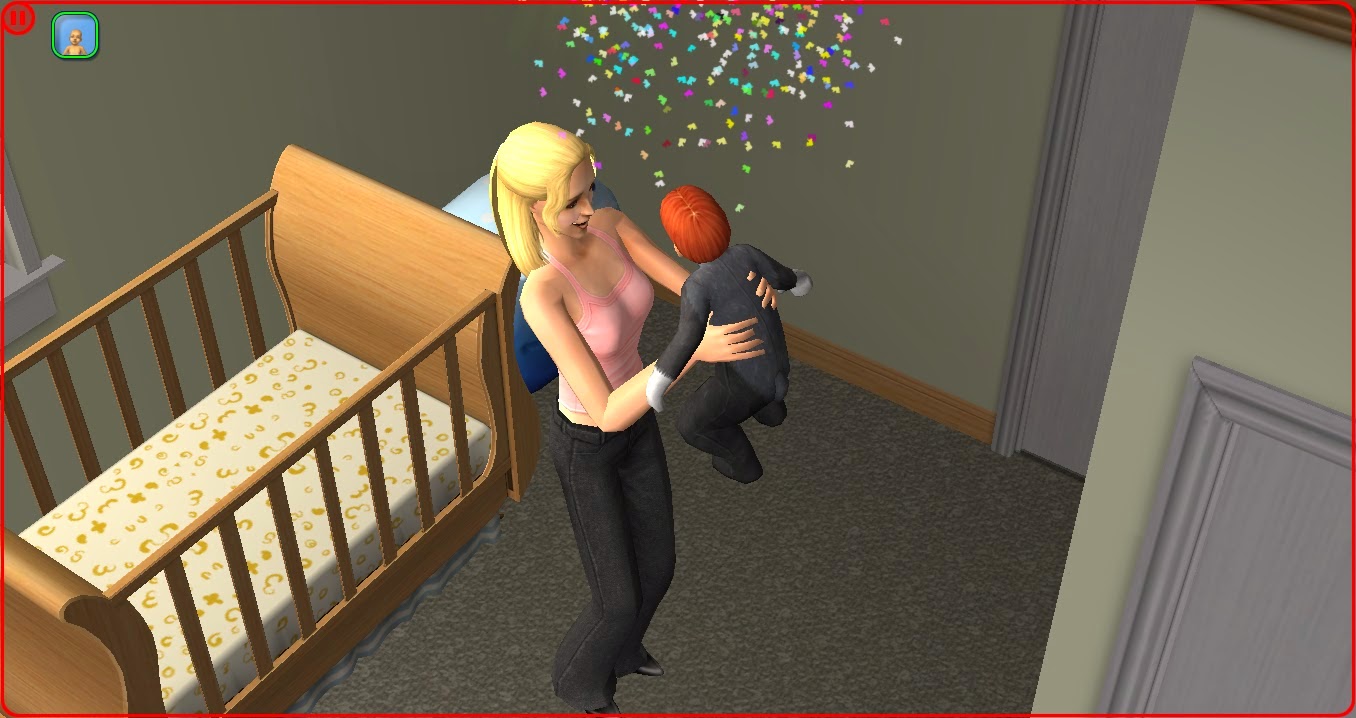 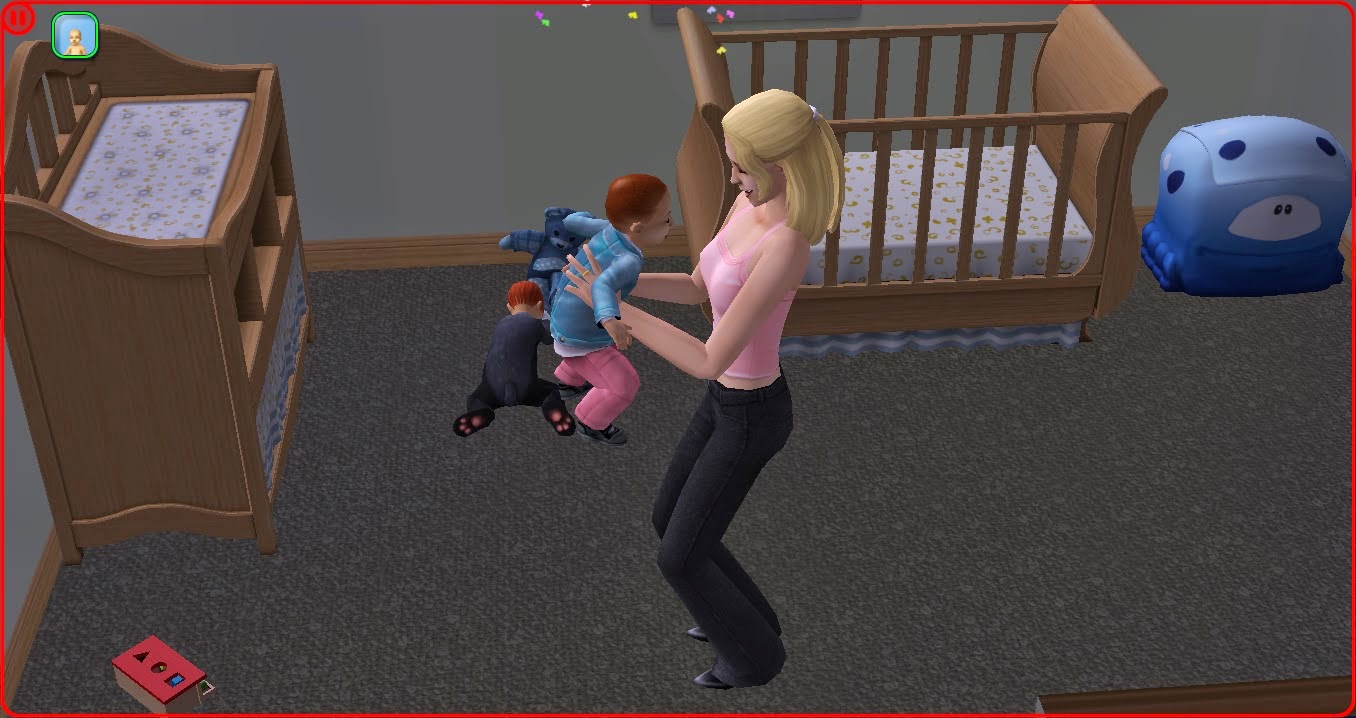 Then David.
(For some reason David didn't age up.  I had to use the tree to age him up, more on the tree later) 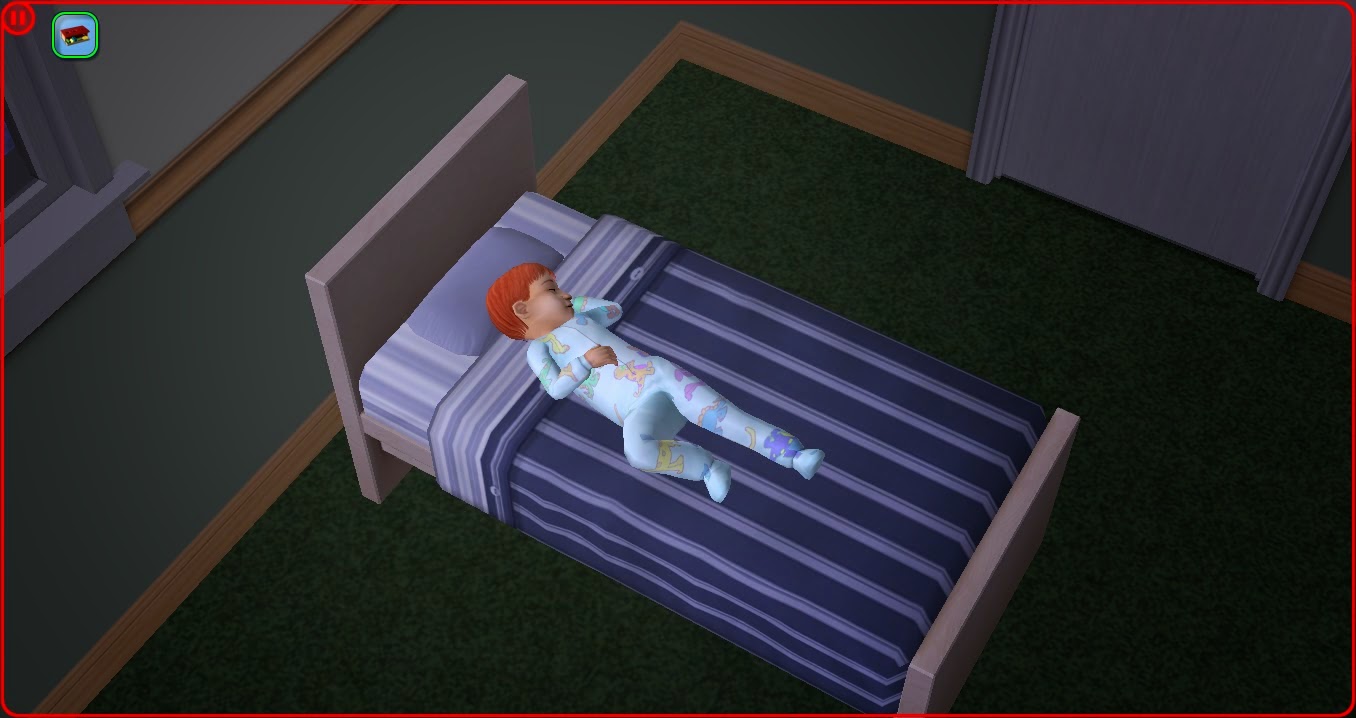 I downloaded these toddler beds off Mod The Sims.
(Sorry I didn't write down the maker but if you want to know who made them ask and I'll find it for you.) 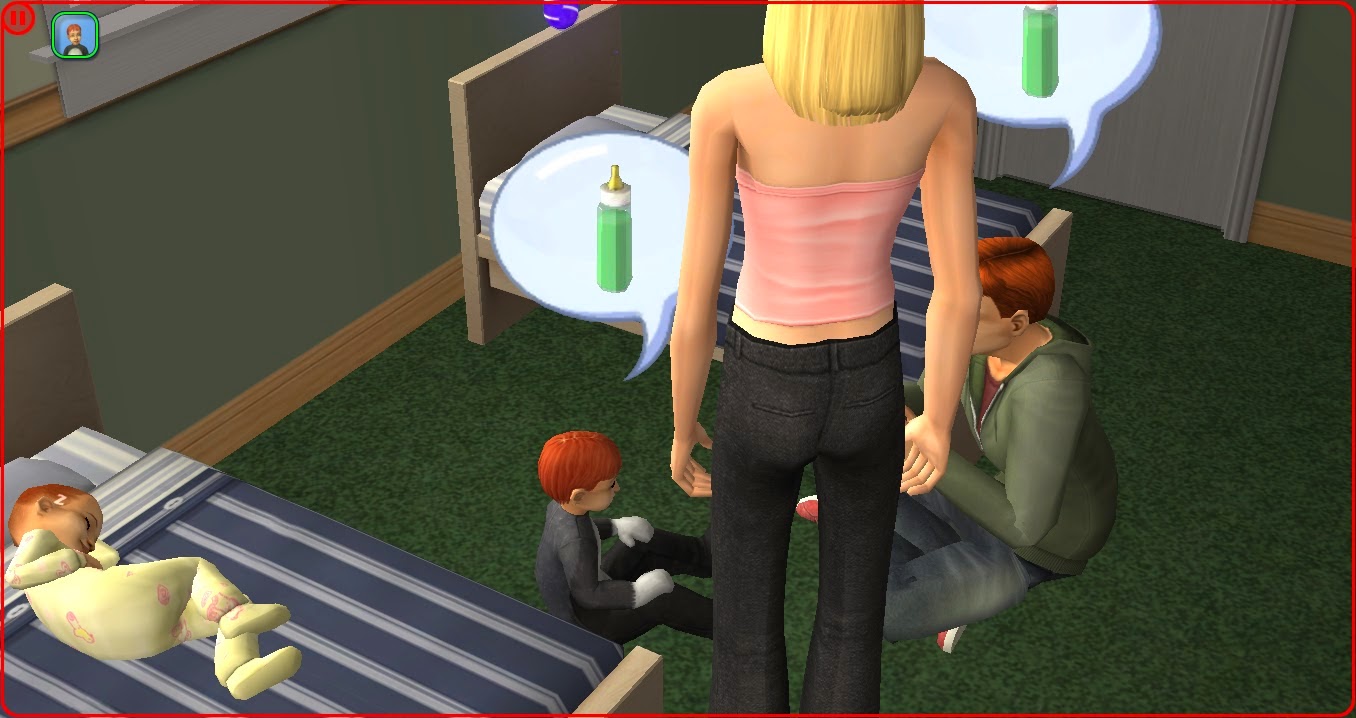 Rhys has 2 days off and helps Sierra teach the boys their skills. 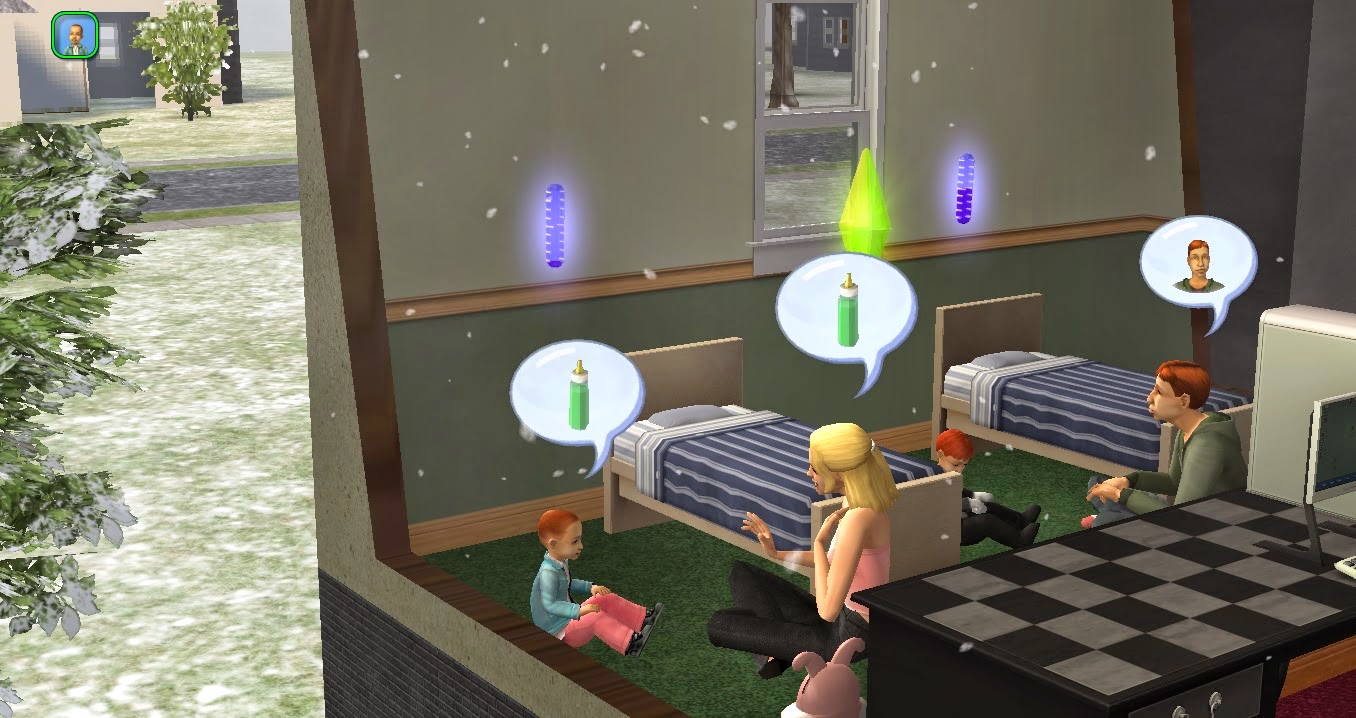 I had to leave the walls down for this one. I just thought it was cute. 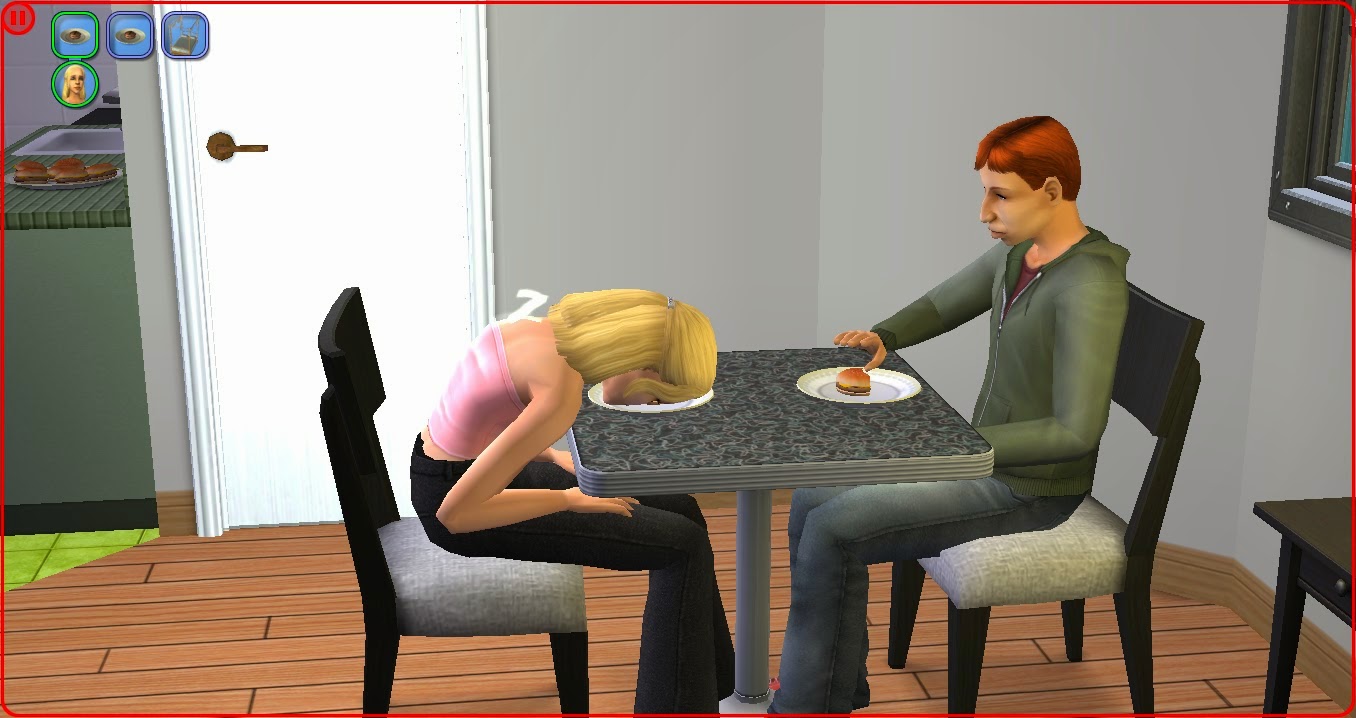 Having toddlers really takes it outta ya!  Sierra passed out in her food. 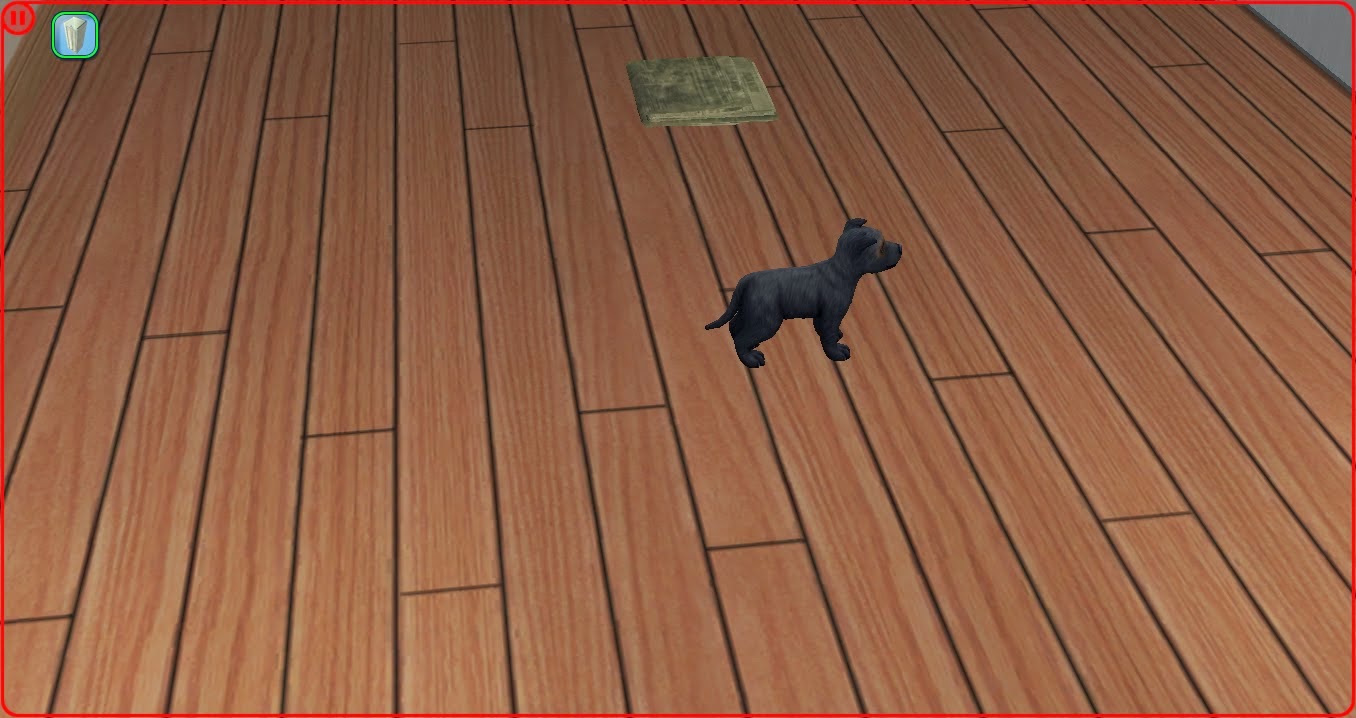 Rhys has wanted a pet since they moved from college.  Finally I just said fine and adopted this puppy.  I named him Scruffy. This is as close as I could zoom in, I'm sure there's some trick to zooming that I haven't figured out yet. 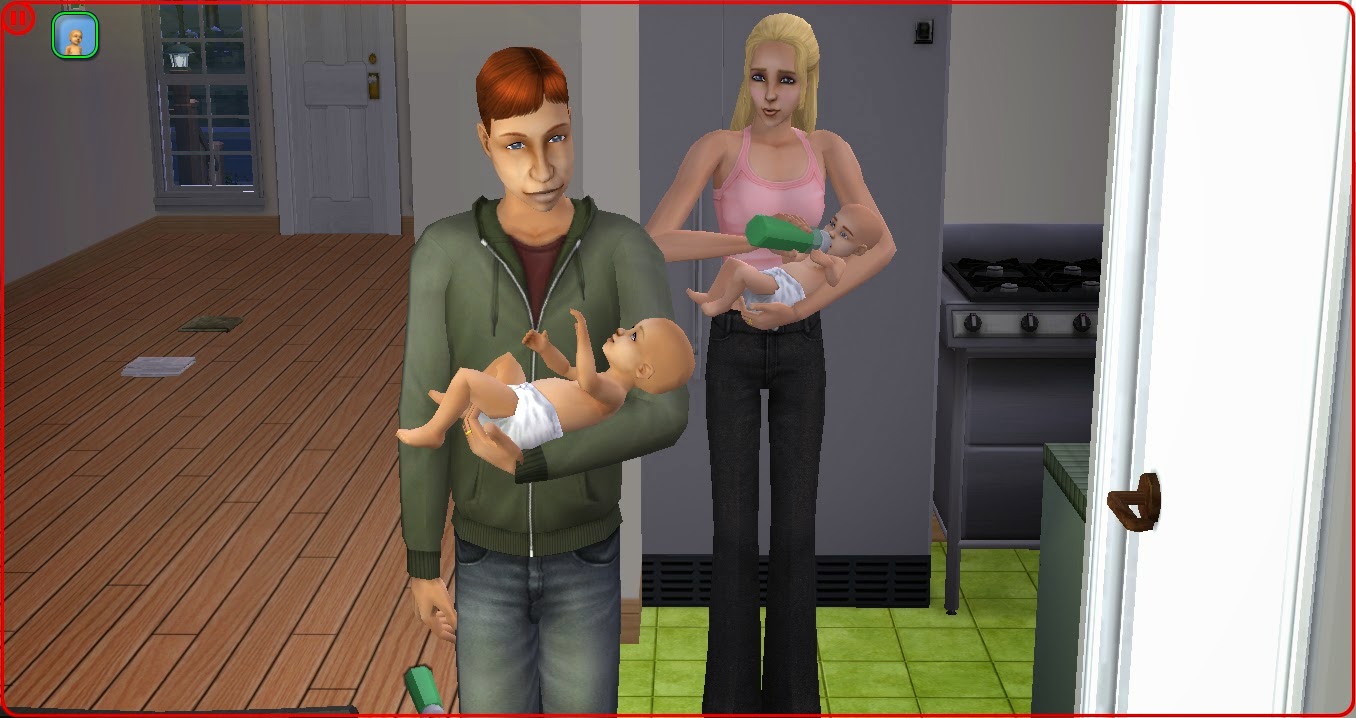 Oh yea by the way since Sierra's aspiration is to have 3 kids go to college they tried for baby again.  They both have the twins thing checked off in their aspiration points but from what I read that just doubles the chance of twins.  Pfft!  They had twins again.  Alex and Monica. 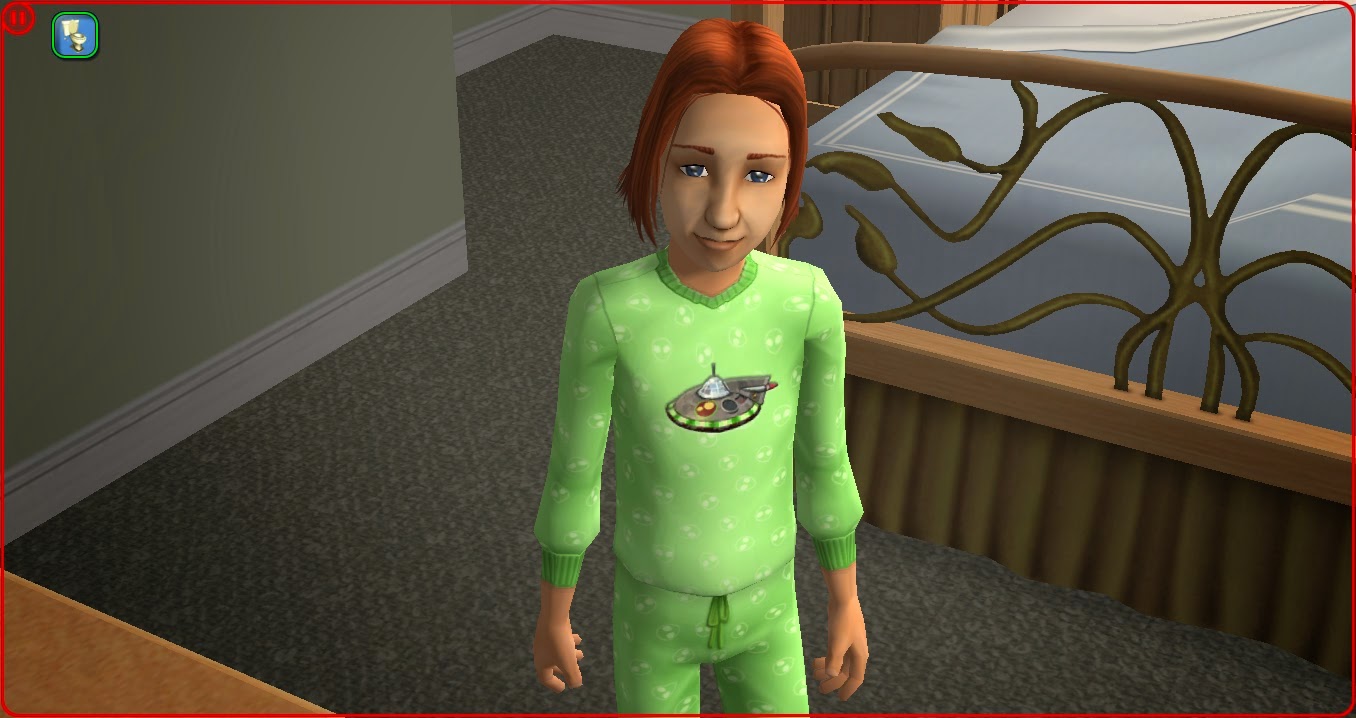 Jimmy ages up to child.  This is what he looked like before I changed his hair using the mirror. 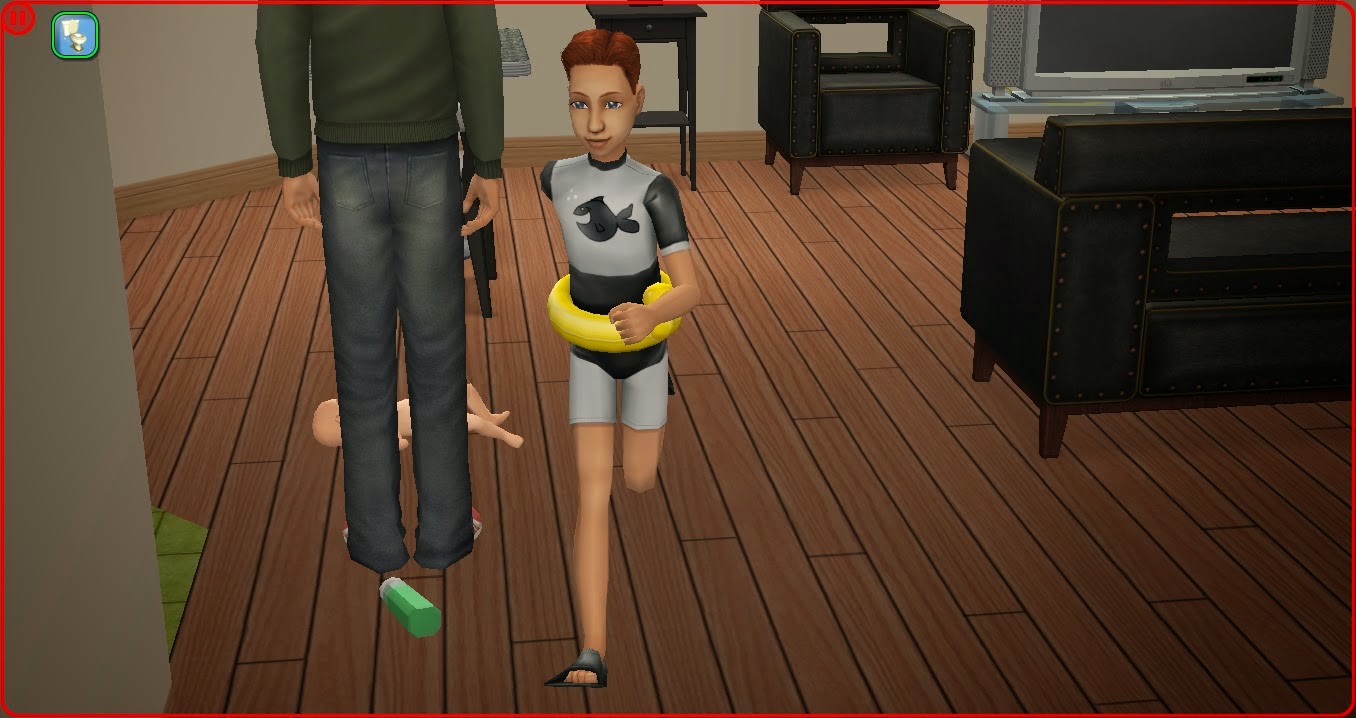 Here's David after aging up.  (Had to use the tree again)  This was his everyday clothes! 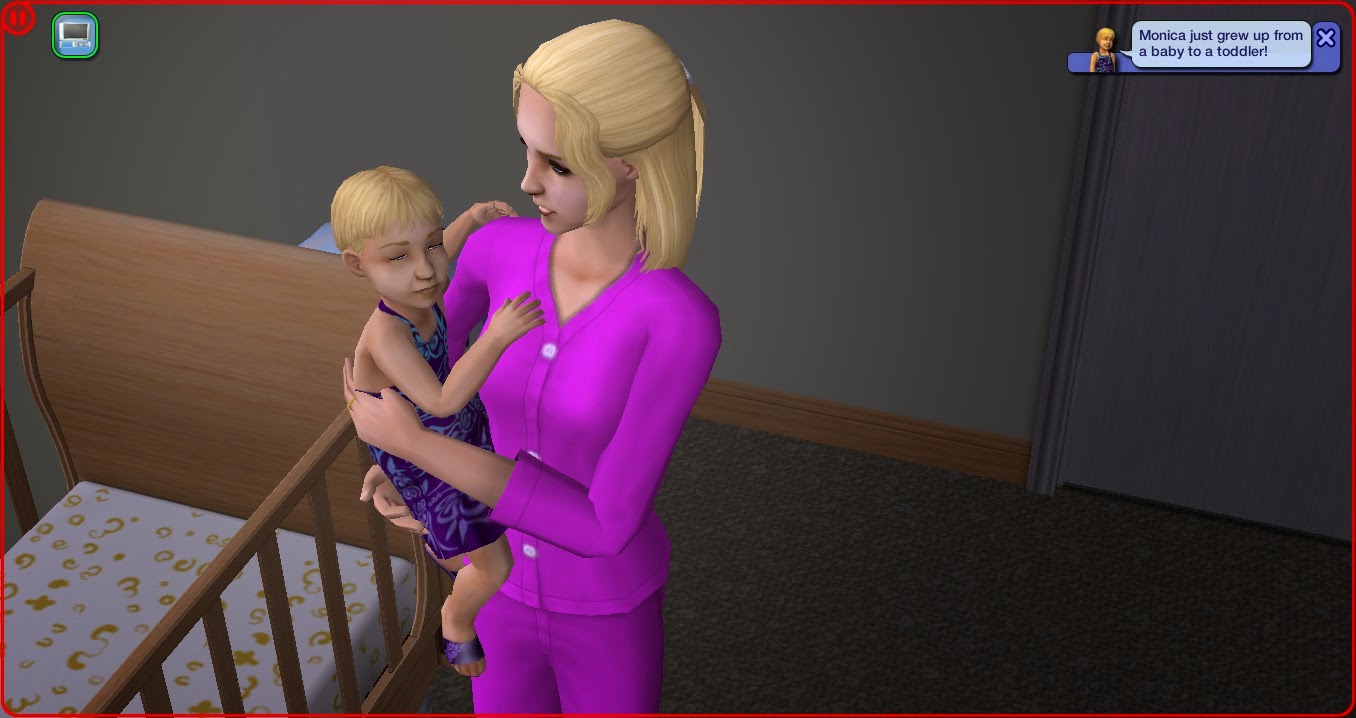 Monica ages to toddler.  Look she got her Mom's haircolor! 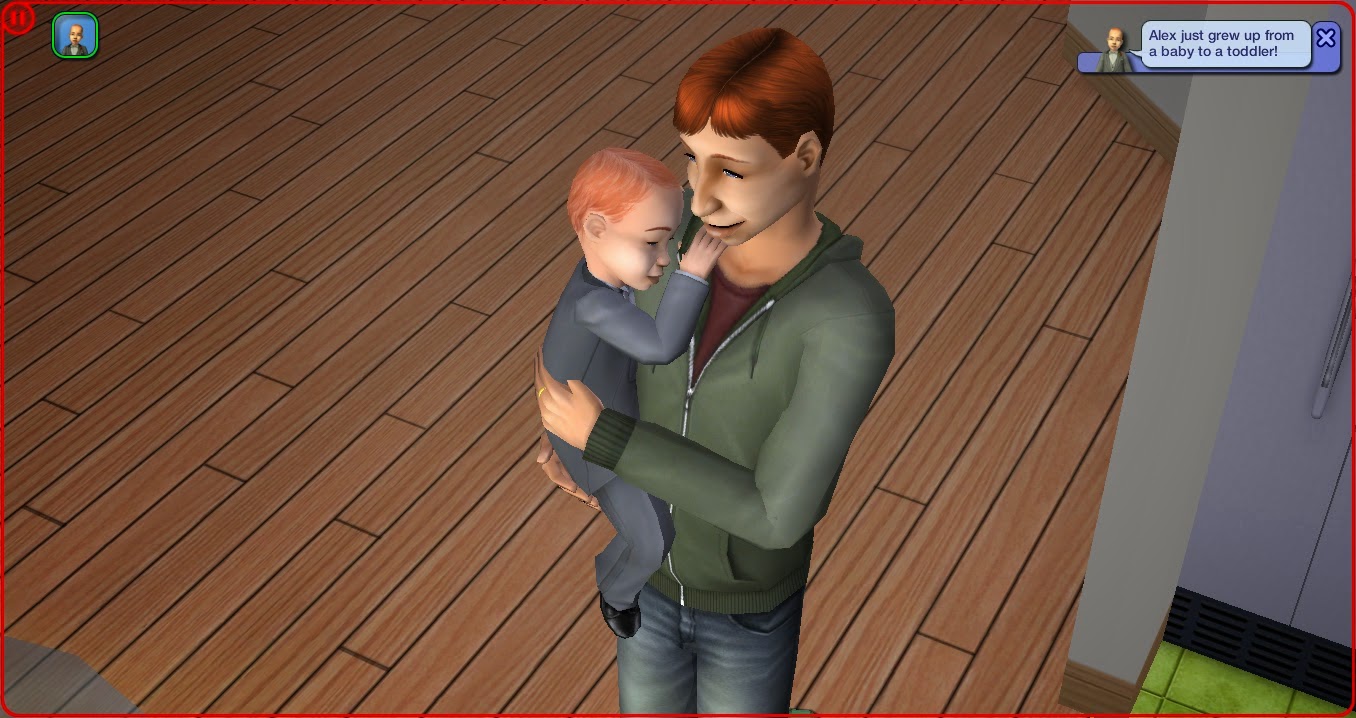 Alex ages up to toddler.
(Had to use the tree for him too, must be a twin thing?) 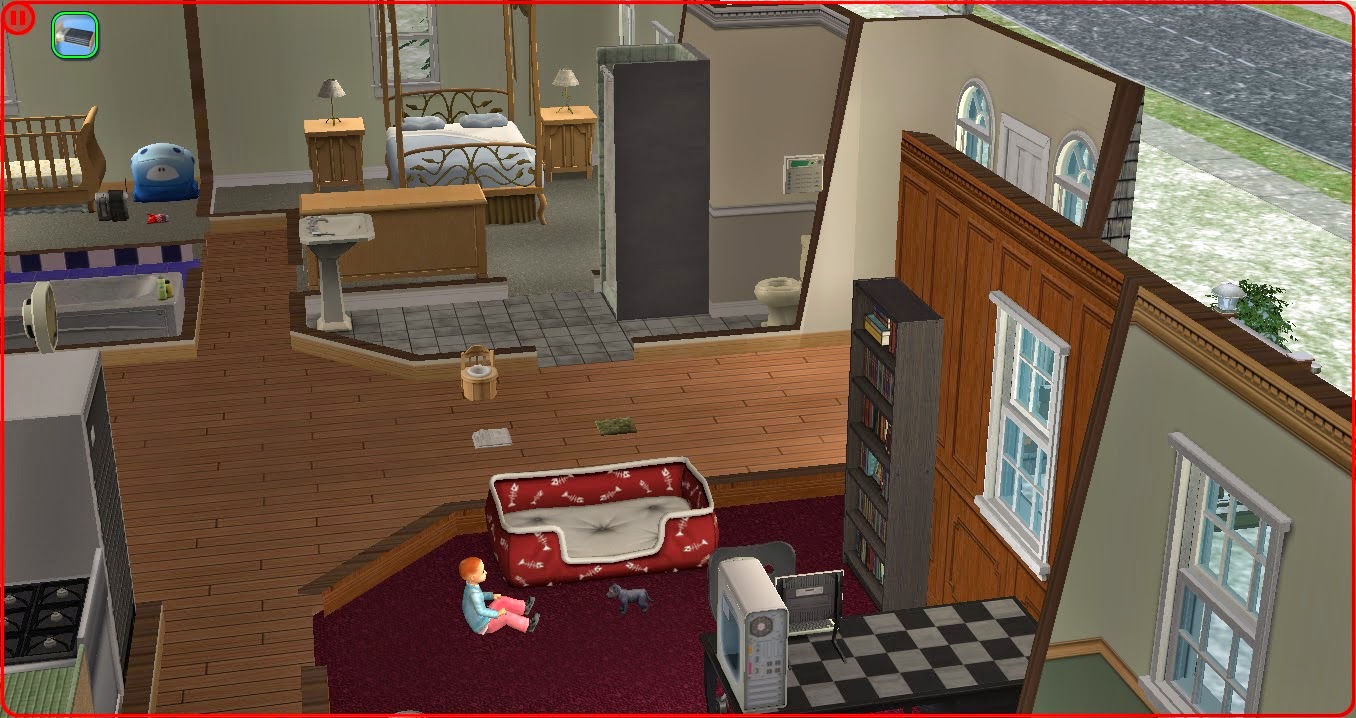 I had to leave the walls down cuz that room is SMALL.  I wanted to show Alex playing with Scruffy!  It's so cute. 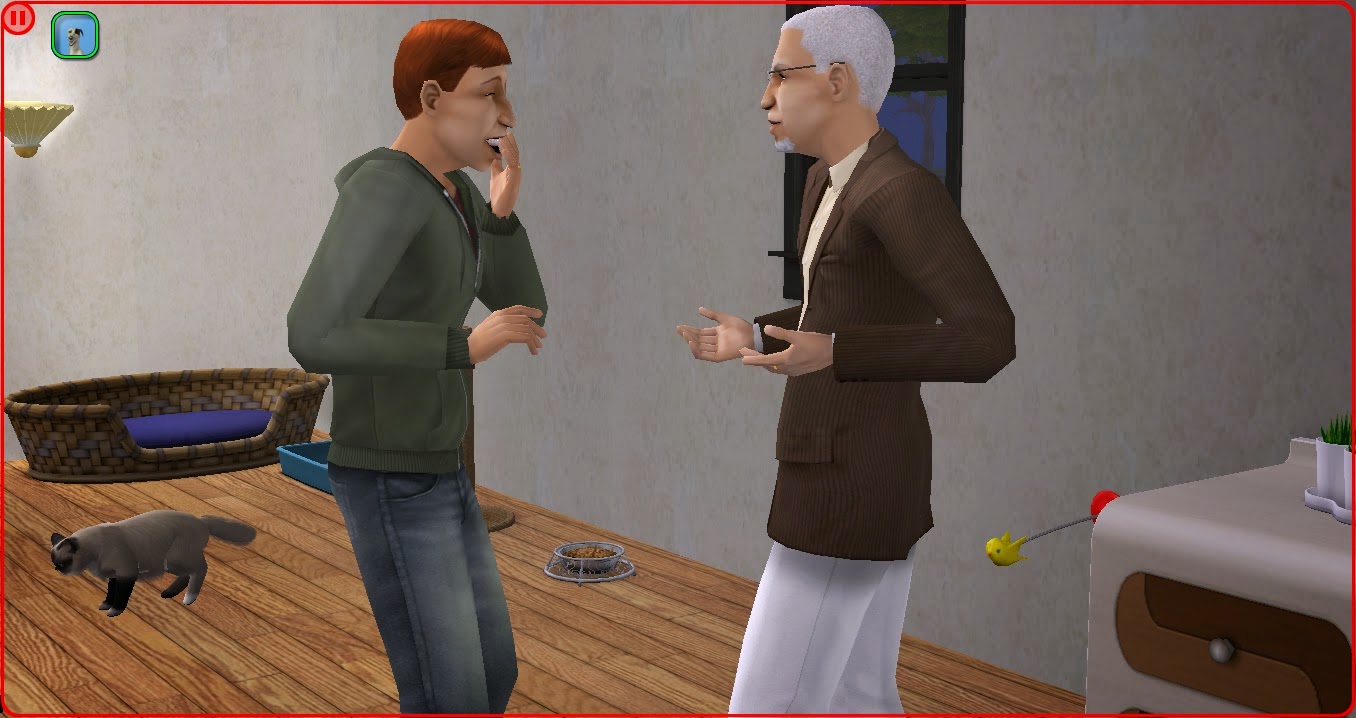 I played Rhys's parents for a day.  Then invited Rhys over. 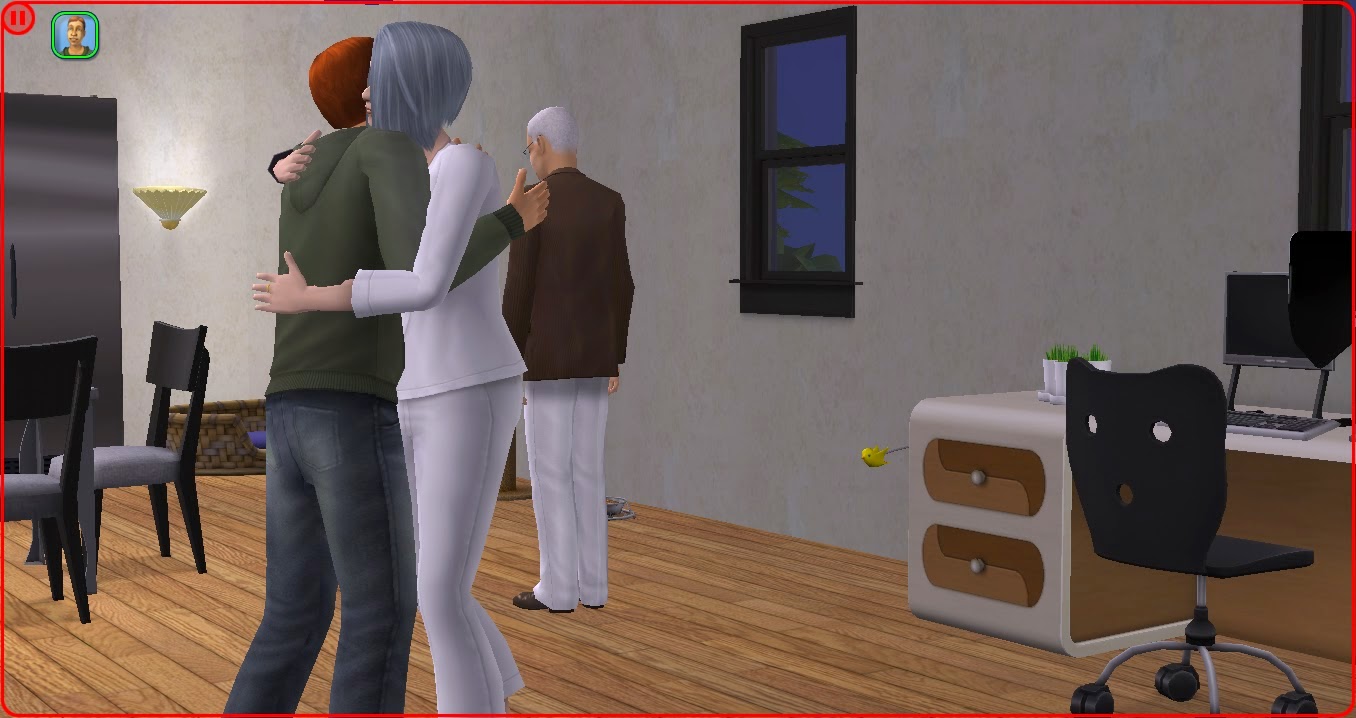 Raina gives him a big hug and 2 of the most expensive cars.  She doesn't need the money anyway. Remember the genie gave her all that cash? 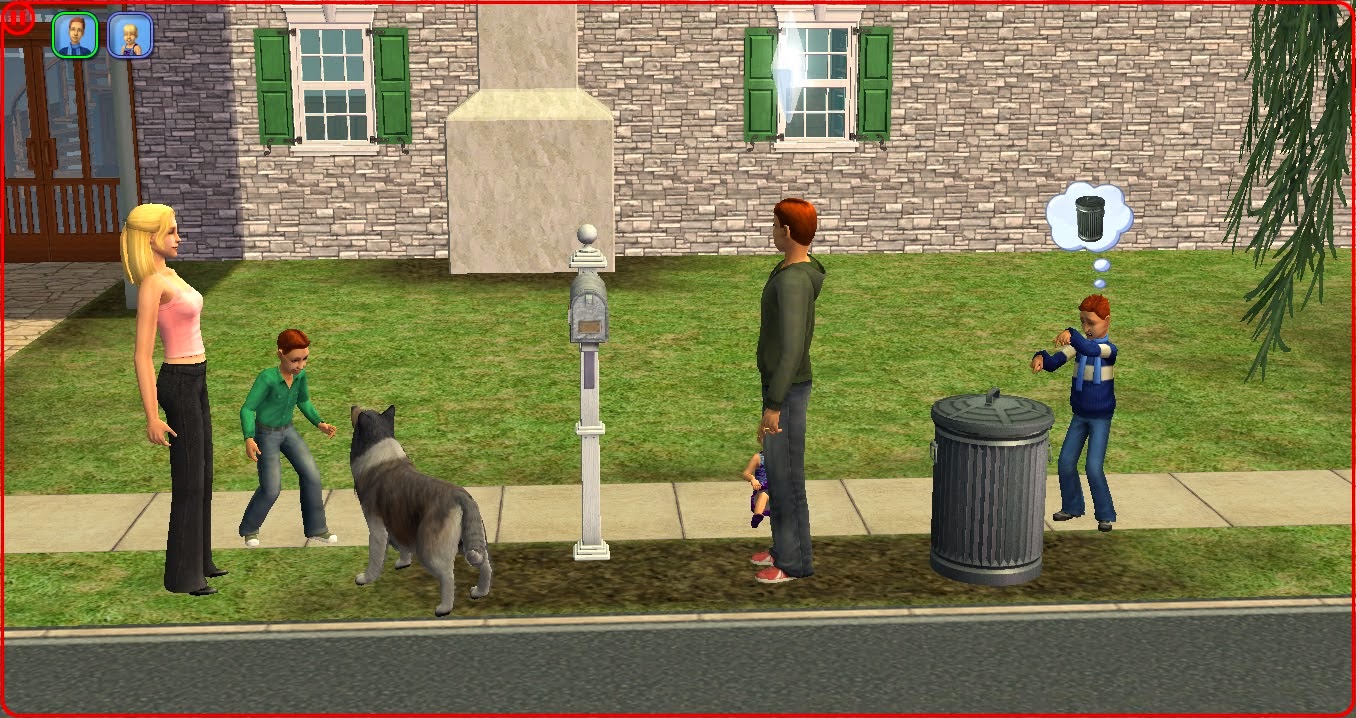 Back to Rhys.  He sold the 2 cars and bought a bigger house.  Hopefully it will be easier to take pics with bigger rooms.  And look!  Scruffy grew up.  If you're wondering where the toddlers are Monica is by Rhys's feet and Alex is behind Sierra.

So I promised to tell you about the wonderful tree that has saved my family.  It's actually a mod called The Sim Blender.  Check it out here.  After you download it it comes in the form of a tree in a planter.  You click on the tree and have options like max all motives, ect.  I swear I don't think I would be playing anymore without it.  First, it aged up the 2nd twin when they didn't.  Then it maxxes poor Sierra's energy so she can take care of the toddlers.  And once when the house was just utter choas I maxxed motives for the whole household.  Normally I wouldn't use cheats like that but omg this family is taking it out of me!  So that's the wonderful tree, ta-da!
Posted by Rainy at 5:39 PM