When we left off Lyla's gardian had just passed away from hunger.  Now Finally Lyla can leave the general area of the lot!  She collects and digs then fishes until she is very hungry.  Nobody seems to ever cook at the park by her lot.  She visits the Desert Bloom park to look for food and collectables. 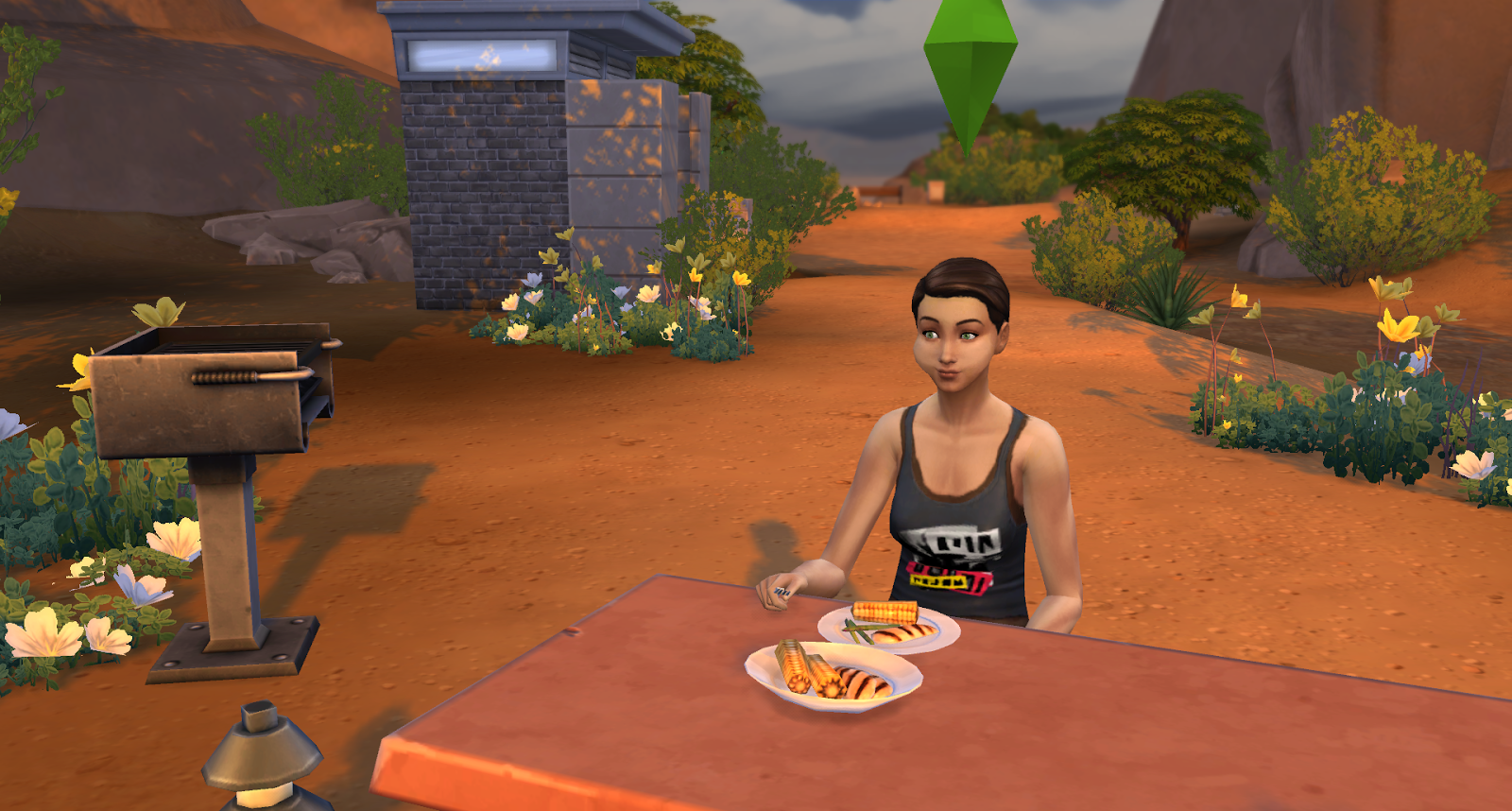 She finds some grilled chicken.  Yum.  There is almost always food laying around the parks it's pretty convenient. 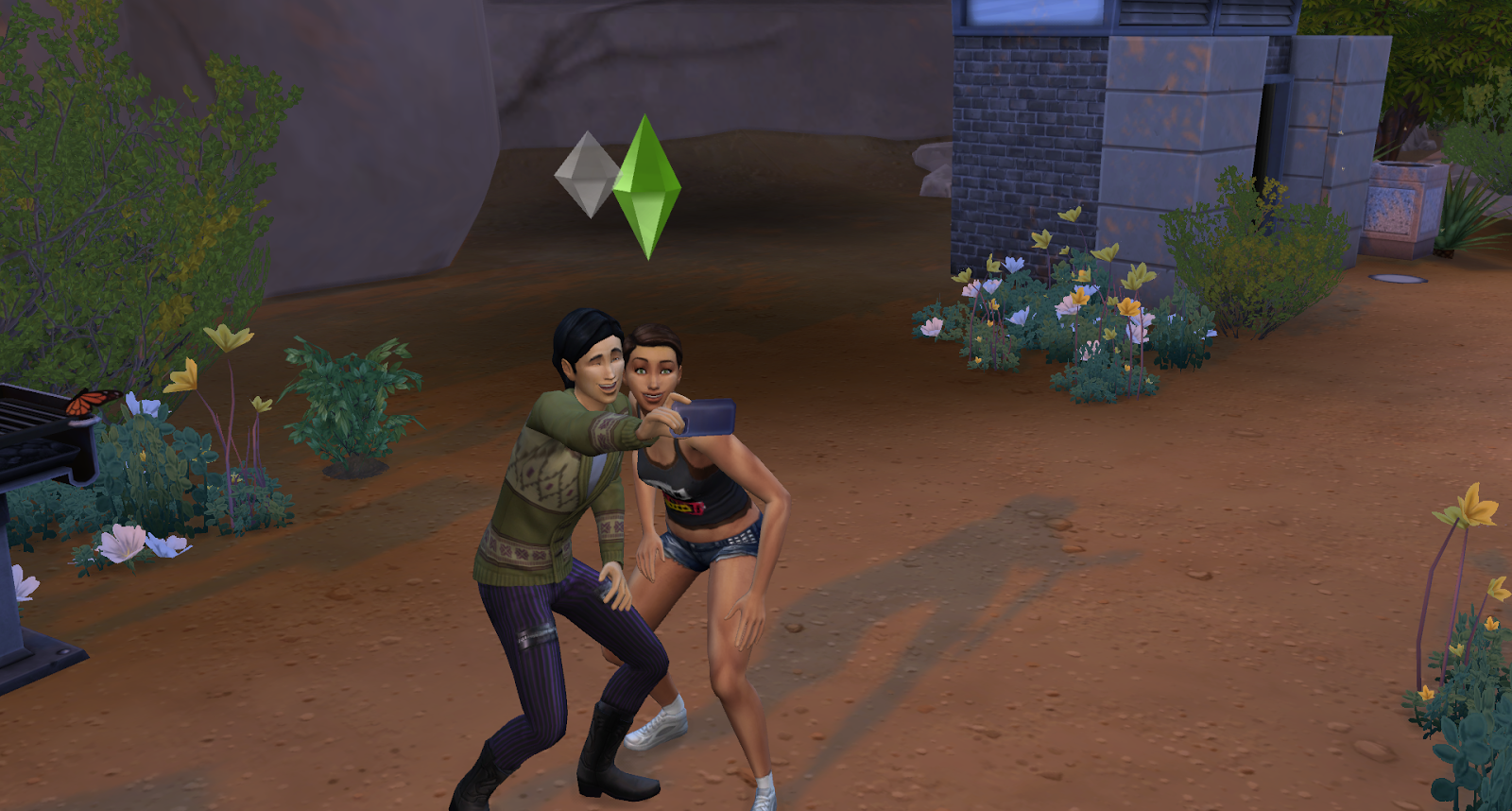 Then she notices another teenager!  He is doing his homework at one of the tables.  His name is Rez and they socialize for a bit.  After filling her social bar she uses the park bathroom and heads back to her lot to feed her cowplant and sleep. She wakes up with a sore back from the cheap bed.  Time to sell all her collectables from yesterday.  She has made $1,124!  I sell her cheap bed and upgrade to a better one.  This doesn't leave many simoleans so no walls for Lyla yet!  She goes back to the park to look for food.  She meets Malcolm Landgrab who is also a teenager.  They have a short boring conversation.  She finds some hotdogs then digs all the digsites at the park but needs fun badly. 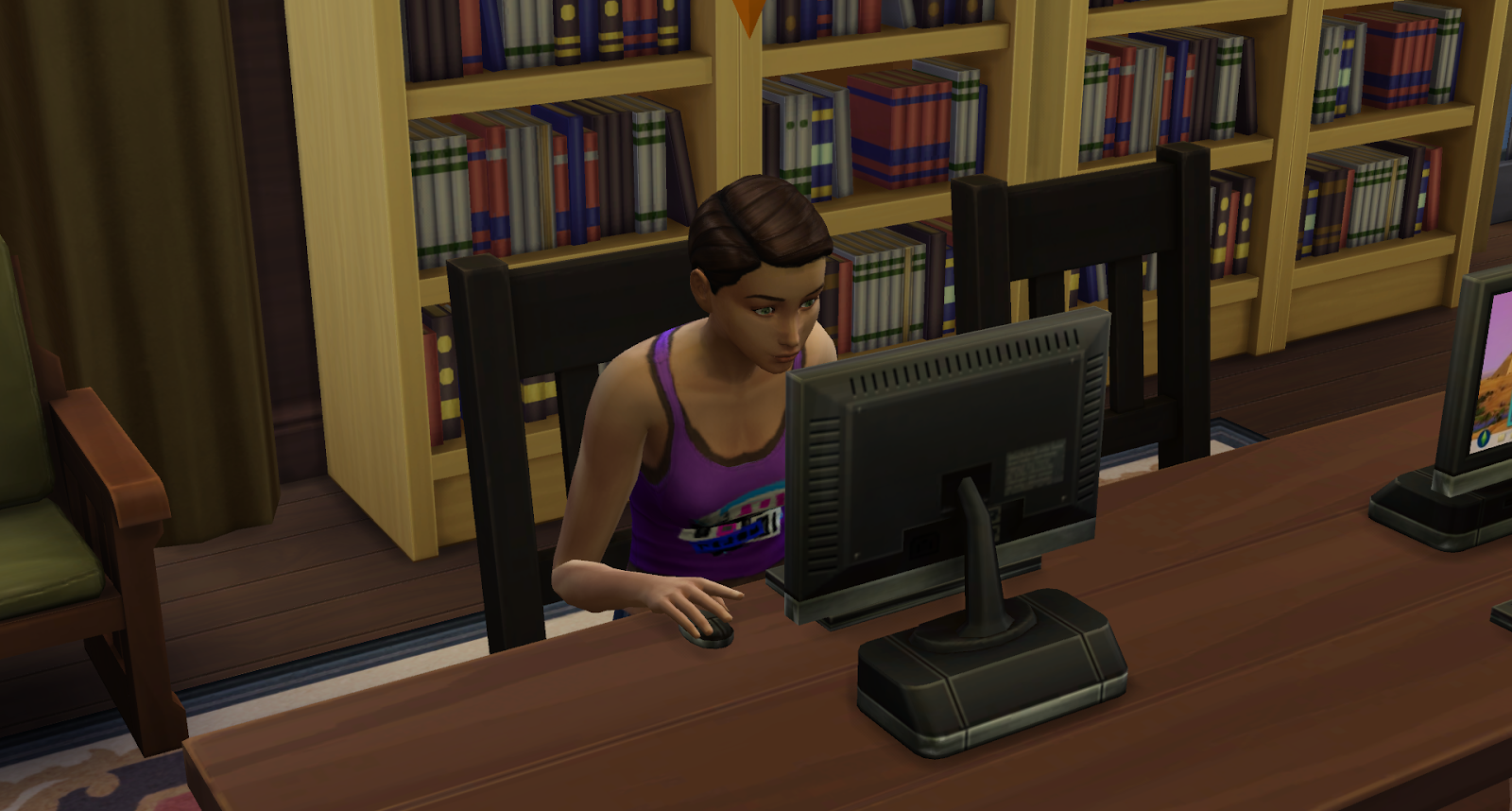 Time to visit the library to play games on the computer.  Hopefully nobody will wonder why she is not at school. Once her fun is full it's off to the gym for a shower.  She has to hop all over the place to fill her needs. Then she is hungry again!  Off to the park.  There's nothing at the Willow Creek park but the Oasis Springs park scores hotdogs! 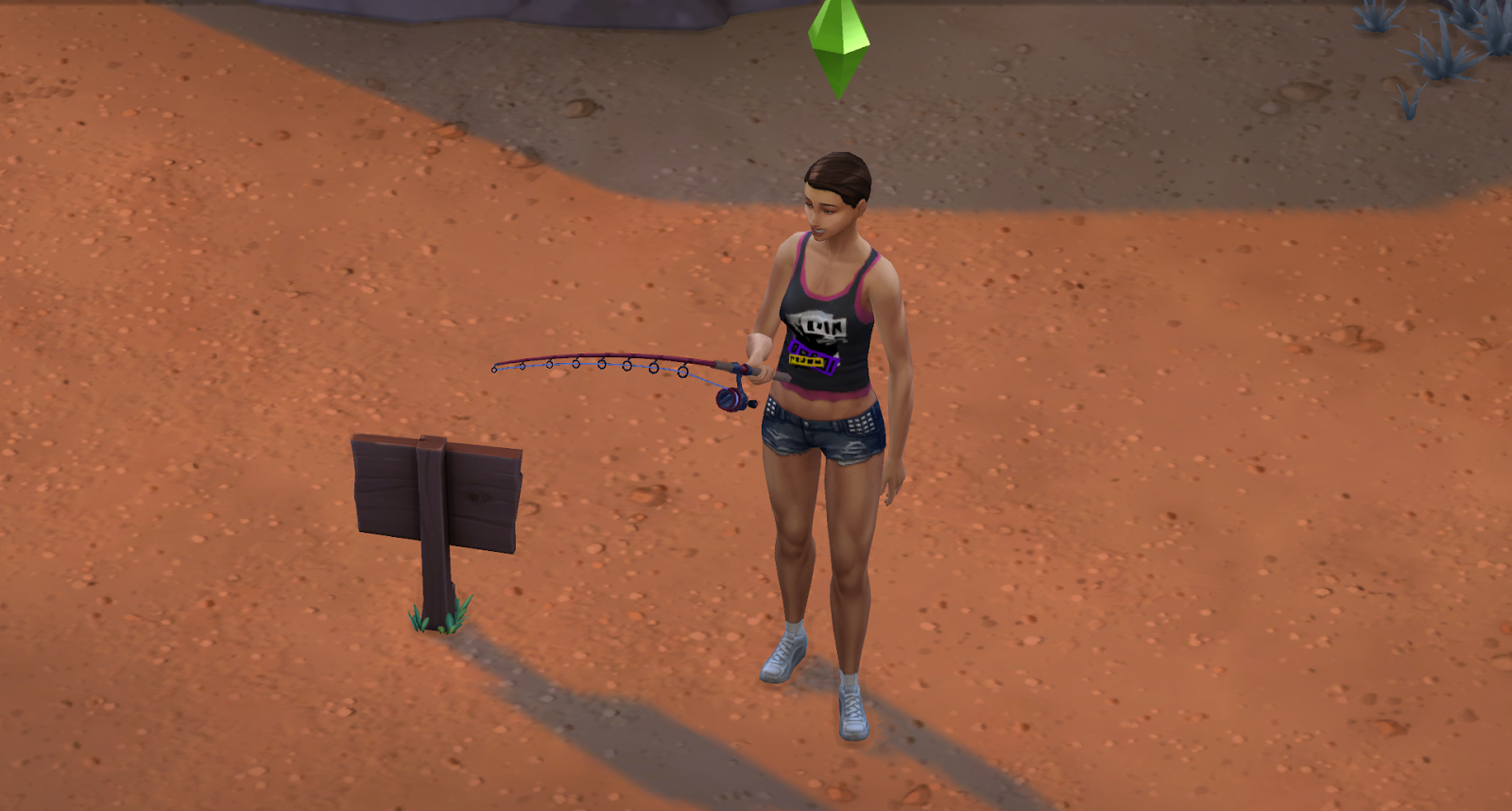 She gets a notification that she is now a D student.  Well no wonder since she doesn't go to school!  She feeds her cowplant and gathers all the collectables around her lot.  Then finishes the day with some fishing. This time it's not a sore back that wakes her up but a full bladder.  Off to the park for a toilet and hopefully food.  Luckily there are some more hotdogs.  While there she looks for dig sites and collectables.  Now her fun and social are low. I have her play chess with Cassandra Goth but Cassandra gets up before I can take a picture.  Chess fills up fun slowly and soon it's time for another visit to the gym for a shower. After her shower Lyla decides it's time for a nap, she woke up really early today.  She wakes up from her nap still tired and now she's hungry again.  But before looking for food I have her dig up all the dig sites in the area. 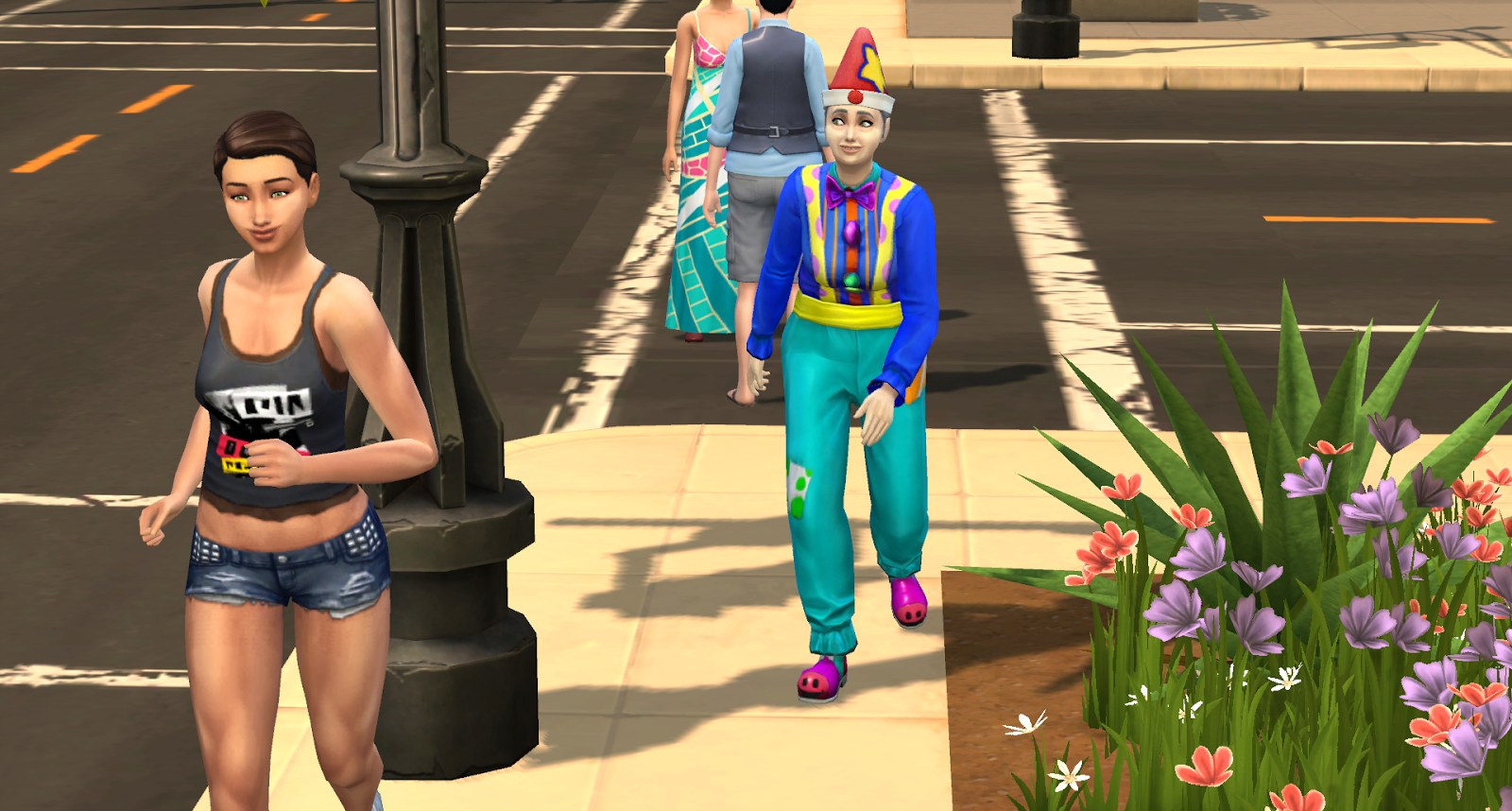 While looking for dig sites I saw this weird clown looking person.  I had to take a picture of that!  Then Lyla went back to the park to look for food.  All she finds is a half-eaten hot dog.  She heads back to her lot for a nap.  While she naps I sold all of her inventory.  In the last 2 days she has collected $2,300 simoleans worth of stuff!  I worry about the bills.  It still might be too soon to build walls.  She wakes from her nap still tired, hungry and low on fun.  I decide it's time to end this chapter of the runaway teen challenge!