Edit: Nobody regrets what happens here more than I do.  I should have taken the time to think over my problem longer.  It would have been better to just not play as many sims instead of doing what I did.  Unfortunately my backup file is weeks old so there's no going back, only forward. 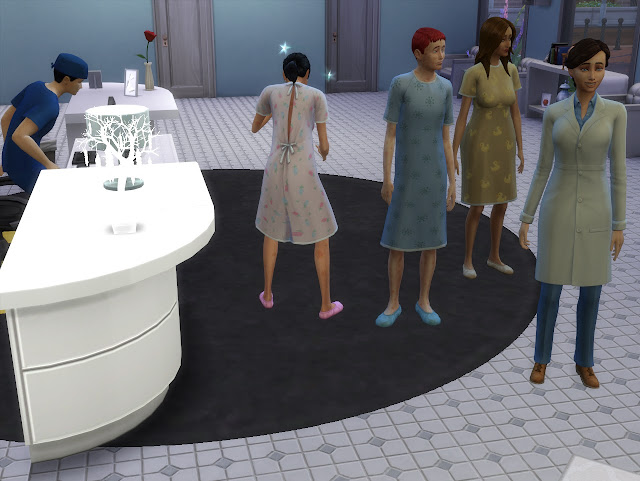 When Tristan and Harmony went around introducing themselves to everyone they had no idea they would start a neighborhood epidemic.  Now they're in the hospital. 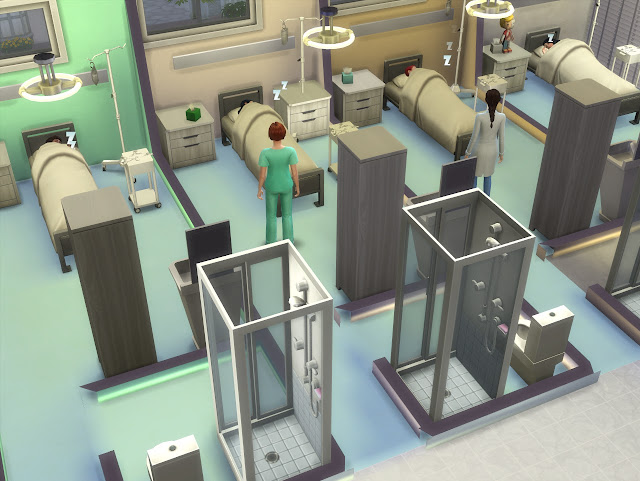 Luckily the hospital has lots of beds because it soon starts to fill up. 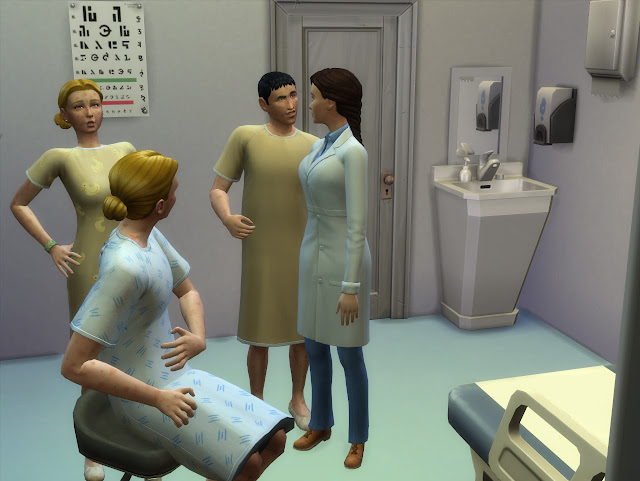 Everyone comes in with the same symptoms.  The doctor gives them the bad news. 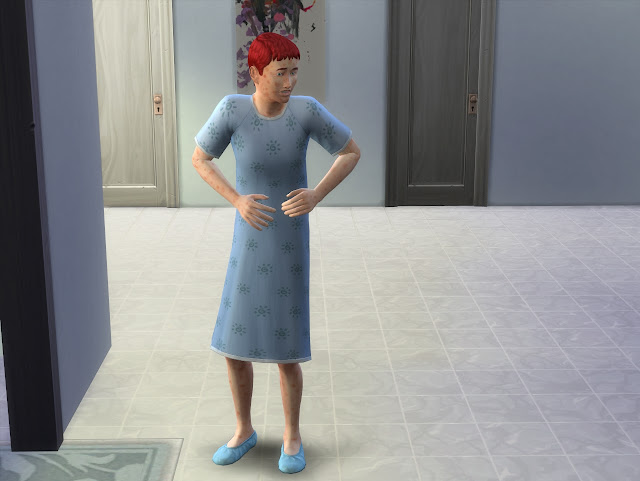 Tristan is the first to go. 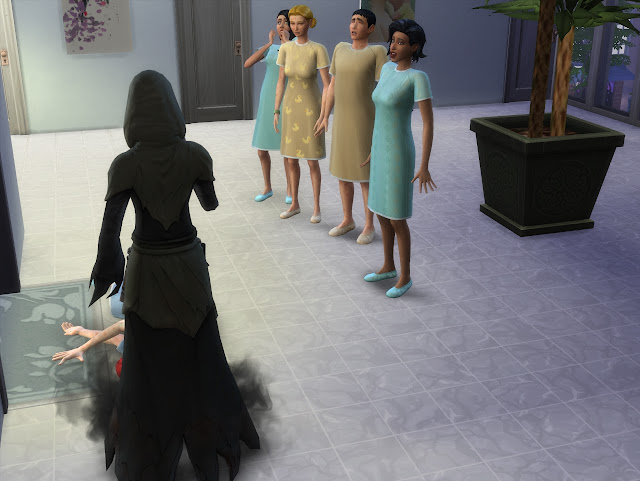 Everyone is horrified when they find Grim there to take him. 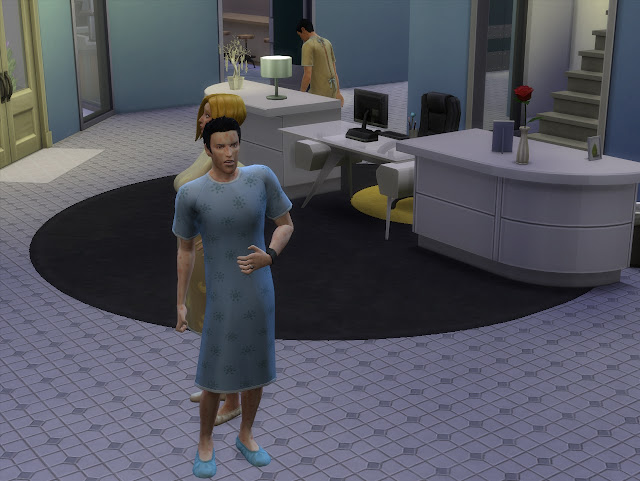 The next day more sims show up with the same symptoms. 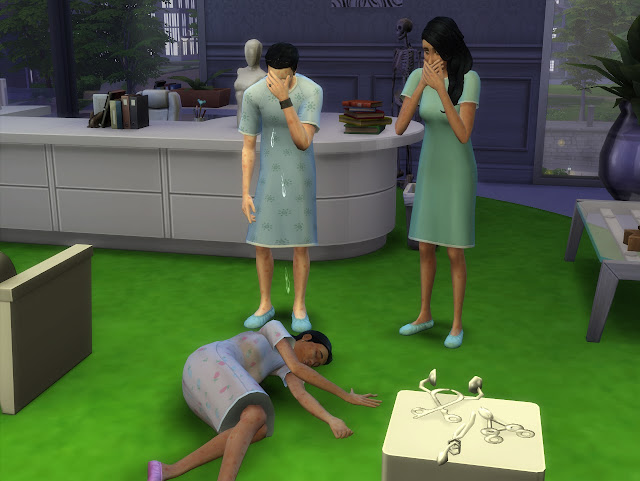 Harmony is the next to go. 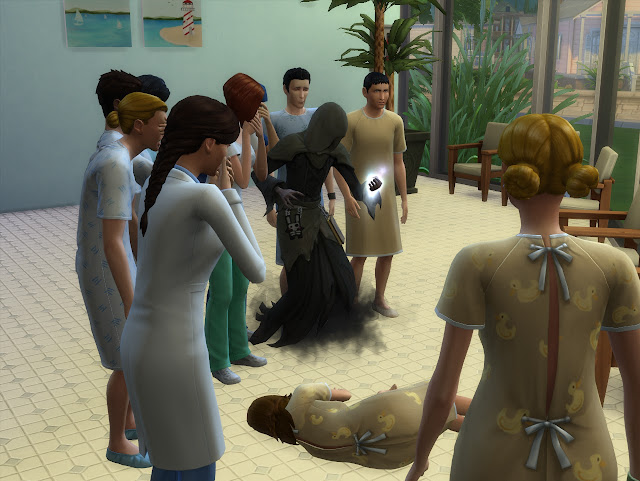 By the time Harmony's mother Ember goes there's a crowd in the hospital. 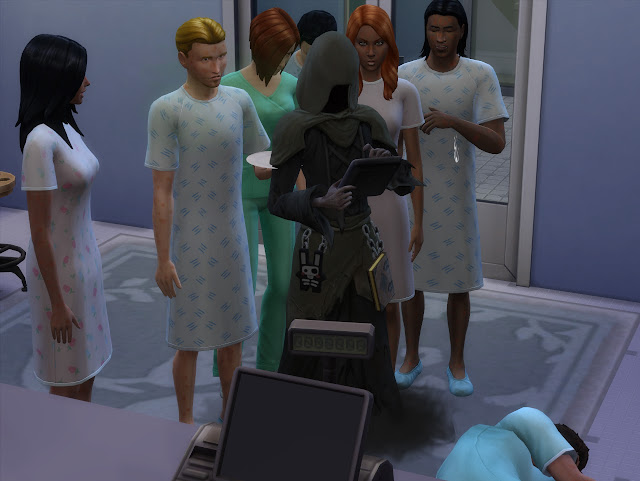 The days go by and more sims show up at the hospital as well as Grim to take them away. 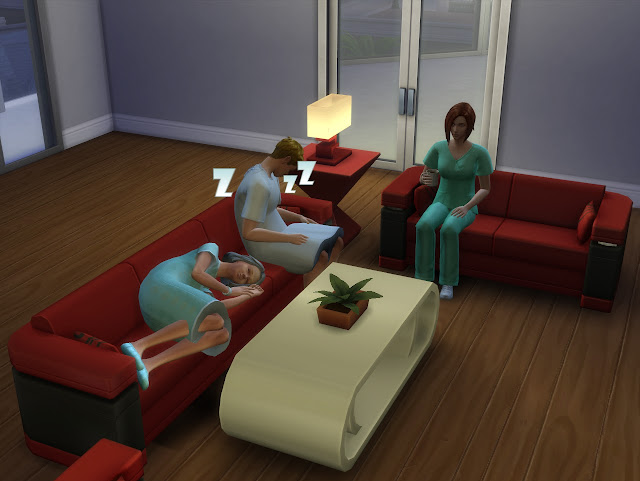 Soon all the beds are full and sims have to resort to napping in the hospital's lounge area.  The staff is overwhelmed. 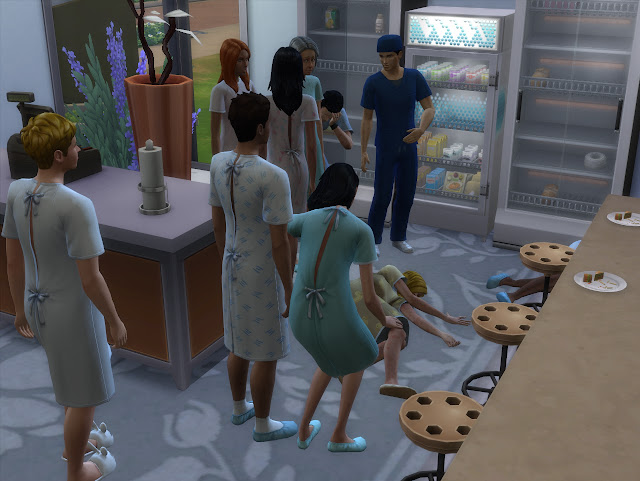 Soon sims start dropping two and three at a time.  The nurses notice they have the symptoms as well. 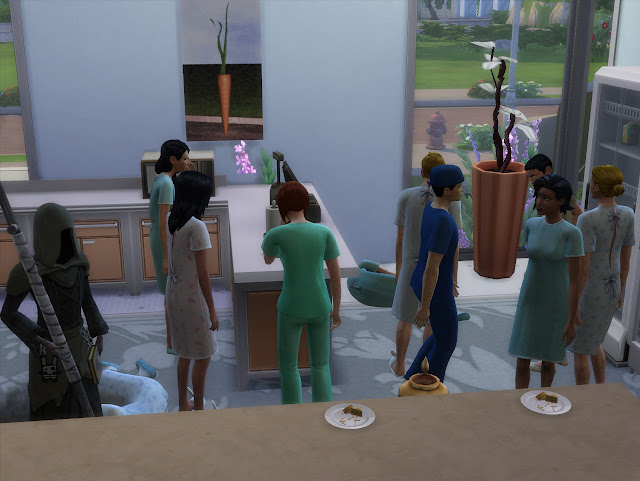 It just doesn't end.  Grim never leaves because once he's reaped one sim another drops. 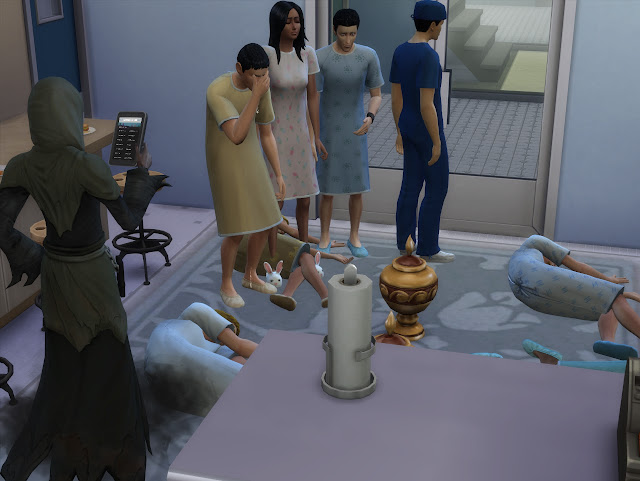 It's a tragedy, they stand by and watch their loved ones die knowing their turn could be next. 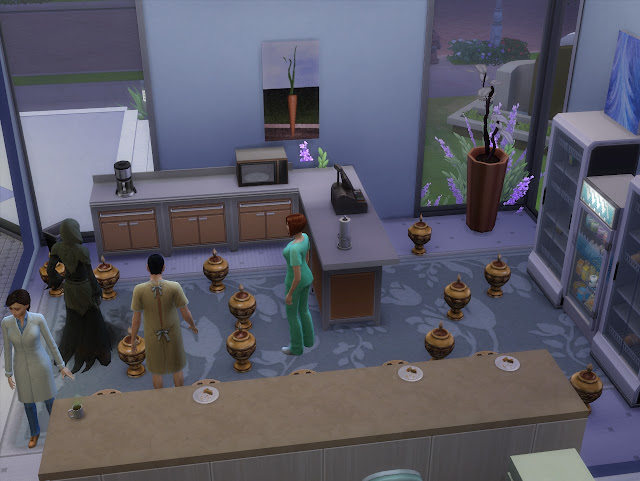 (My son started watching all the deaths and said I had to take a picture of all these urns.) 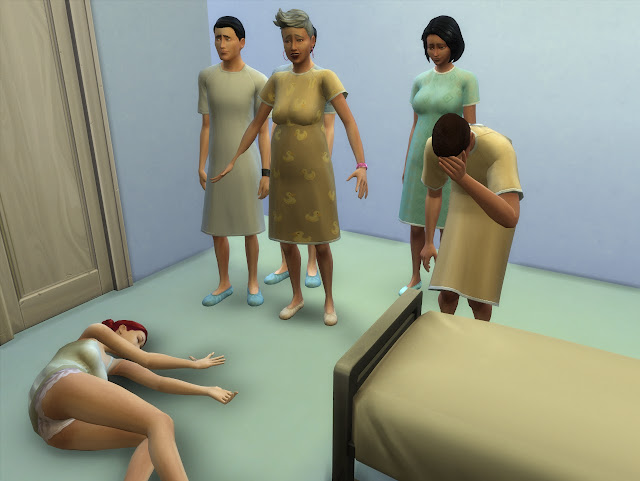 It's been almost a week and the last group of sims show up at the hospital. 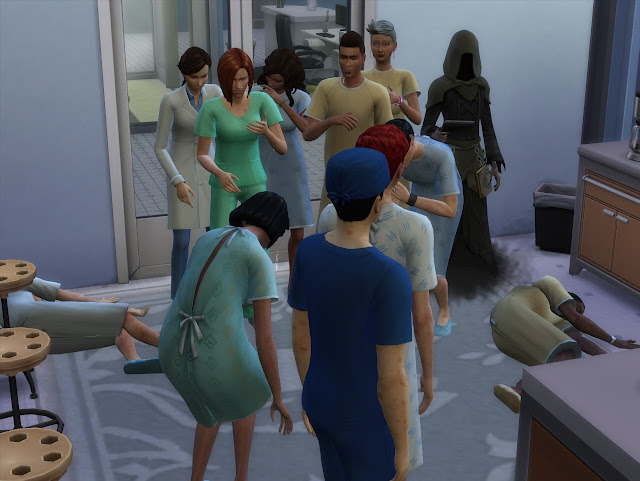 It's a miserable place for everyone. 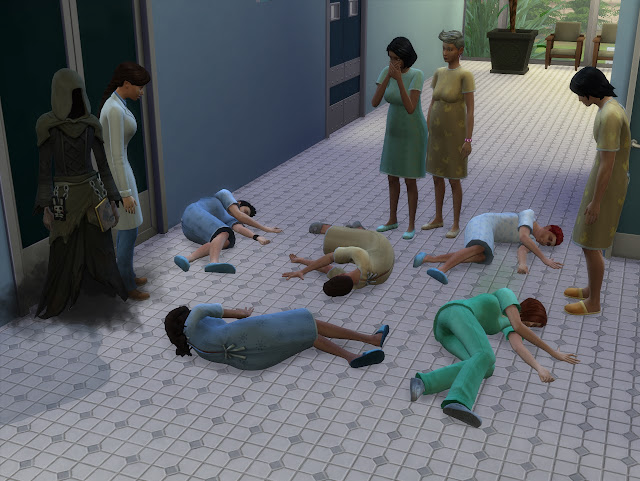 The poor doctor watches as not only her patients but her nurses succumb to the illness. 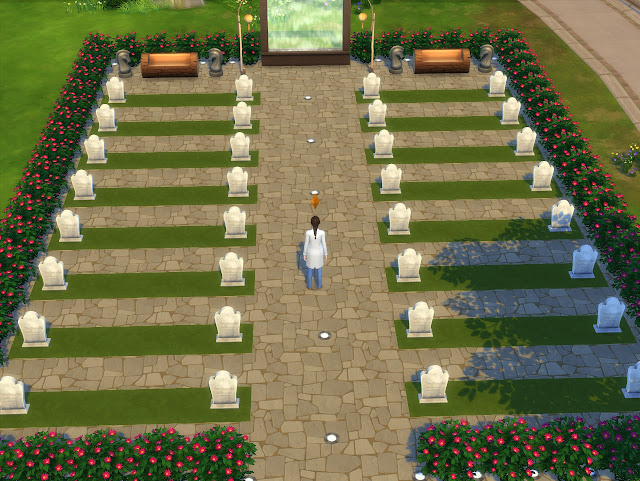 In just under a week 36 sims were lost.

Chapter notes:  I know what you're thinking... why on earth would I do this to my sims???  Well, I'm playing this neighborhood on a rotation.  I let things get out of hand and had 22 households and 83 sims.  I was sitting yesterday making a chart with all the households so I could remember who is supposed to hook up with who, who's getting married, who's having a birthday soon, who's having a baby soon, ect.  I saw some sims on Twitter that I really liked and wanted to add to the neighborhood and was instantly frustrated because I had sooo many sims already.  Some of them I don't even like, I just play out of obligation.  I feel guilty when I spend too much time with my favorite families.  In my Sims 2 BaCC the creator of the version I'm doing does a random number generator every rotation... 1-20 out of 100 they die of an illness.  When I saw Tristan and Harmony sick in the last chapter I thought of her idea and built on it.  You'll notice that most of the sims they visited died.  There were a few that rolled to die that I was upset about, a few that at the last minute I just couldn't send to the hospital and one that I tried to plead the reaper for because I decided I didn't want him to die but it didn't work.  Where things go in the story from here I really don't know?  I have a lot of sim biographies to change as well.  I really didn't think beyond the epidemic.  If you have any ideas feel free to contact me!

Thanks go to:
jacqulin for Community Hospital and Harvestchick for Creek Cemetary

All of the lost sims from this chapter can be found in the gallery under the hashtag KUWTJ.